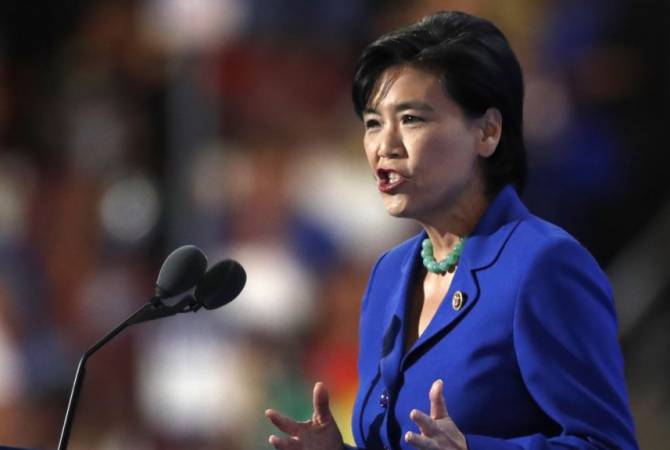 The delegation of the US Congress, comprising of Congresswomen Jackie Speier-Kanchelian, Judy Chu and Congressman Frank Pallone, plan also to visit Artsakh during their upcoming trip to Armenia, Congresswoman Judy Chu said during the event of the Armenian Assembly of America, Voice of America reported.

“I plan to visit Artsakh with a great interest in order to be convinced what is the situation there”, Judy Chu said.

The initiative put forward by Judy Chu, which has been approved recently by the majority of the House of Representatives, aims at providing 4 million drams to implement the proposal of Royce-Engel to strengthen the ceasefire in Artsakh line of contact. These funds will be directed for installing special devices along the Artsakh-Azerbaijan line of contact which will allow to detect which side violates the ceasefire regime. “These funds are directed for strengthening peace and holding accountable thoes who violated the ceasefire”, she said.

Congresswoman Judy Chu will also try to provide 6 million direct aid to Karabakh. She said she was impressed from the meeting with Armenian Prime Minister’s spouse Anna Hagopian in the Congress in spring 2019.

“I particularly want to visit Artskah to get acquainted with the situation, see what is happening there so that I can provide a more serious assistance to the establishment of peace in Artsakh in the future as well”.

Congressman Frank Pallone, who is also the founder and co-chair of the Armenian-American friendship group in Congress, says their visit is especially important because this is the first visit of the US lawmakers to Armenia after the 2018 Velvet Revolution. “One of the reasons of our visit is that our group wants to provide assistance to Armenia’s new government and parliament”, he said.

He informed that despite the fact that the US Department of State advised the lawmakers to avoid visiting Artsakh, the delegation made a decision to visit. As for the Armenia visit the lawmakers are going to discuss the expansion of cooperation in political and commercial fields with their Armenian partners.

“We are very excited for the result of the Velvet Revolution. Armenia is on the path of becoming more democratic country. We are inspired by the new government’s will to fight corruption, implement judicial reforms and establish rule of law in the country”, the Congressman said.

The delegation of US Congress, consisting of both the Democrat and Republican Congressmen, will arrive in Armenia on a one-week visit on October 1 to discuss the practical cooperation programs with the Armenian government.