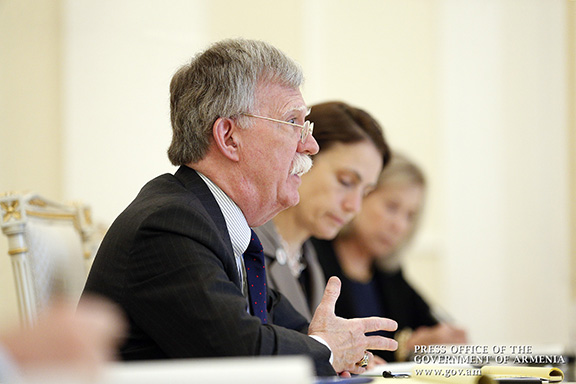 While it is not clear who will replace the abruptly fired John Bolton, President Donald Trump’s national security adviser, it can be said that his departure presents a reprieve for countries like Armenia, which were pressured by Bolton to change course to satisfy the United States agenda in the region.

Bolton famously visited Yerevan last year to impress upon Yerevan that the United States intended to strangle Iran with sanctions, pressured Armenia essentially to take sides, knowing full-well the importance of Yerevan’s unique and strategically important relations with Iran, its neighbor to the south.

He told Armenian authorities at the time to decisively resolve the Karabakh conflict, offering to sell arms directly to Yerevan, while telling Baku that the U.S. would repeal Section 907 of the Freedom Support Act—an amendment to the post-Soviet US assistance effort advanced by the Armenian National Committee of America and its wide grassroots network, restricting aid to Azerbaijan and Turkey until they lifted their blockades of Armenia.

What the new Armenian government was seeking from the United States was renewed dialogue on American investment in Armenia and ways to bolster the strategic U.S.-Armenia relations. Instead what Yerevan got from Bolton was an ultimatum. Bolton was also outspoken, and expressed his dismay about Yerevan’s assistance to Syria via the dispatch of a group of experts to Aleppo to primarily aid in demining efforts in that heavily Armenian-populated city.

At the time of Bolton’s visit to Yerevan, the ANCA spoke out against the U.S. priorities as set out by Bolton, especially as it concerned Azerbaijan and bolstering that military dictatorship to have an upper hand in regional politics.

“The ANCA will continue to press for strict enforcement of Section 907 of the Freedom Support Act, which – as a matter of law, currently waived by the Administration – restricts certain forms of direct U.S. assistance, including offensive military hardware, to the Azerbaijani government. In light of Baku’s escalating aggression, the ANCA calls upon the White House to discontinue its Section 907 waivers and urges Congress to roll back its waiver authority for this law. Parallel to Section 907 enforcement issues, the ANCA is carefully tracking potential arms export control violations related to Azerbaijan, including the third-party sourcing of sensitive U.S. equipment, software, and services for drones and other weapons systems,” said ANCA Executive Director Aram Hamparian immediately following Bolton’s remarks in Armenia last fall.

Good riddance to Bolton and his war-mongering agenda that has placed the men and women of the U.S. military in harm’s way and has threatened the security around the world and specifically in Armenia and the region.