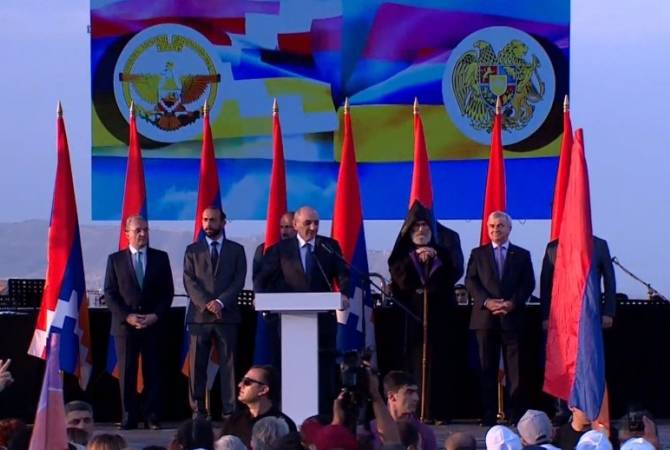 President of Artsakh Pago Sahagian gave a speech at the Revival Square in Stepanakert on August 5.

”I have been present at the trainings, I made shure and can confidently say that the organizers will grant us pleasant, interesting, impressive and memorable moments”, Sahagian said, citing the ideas of the ancestors of the Armenian nation, who struggled and avoided numerous challenges and inherited us a sacred country. ”They gave a commandment that the top value of this country is the individual and humanity”, said Sahagian. According to him, this was the understanding in the people’s minds that made them stand up years ago and announced for the world that they will never tolerate the infringement of their national dignity.

”Armenia and world-spread Armenians were the 1st to react and since then we take Armenia-Artsakh-Diaspora trinity as a way of thinking and lifestyle. Thank to that trinity we were able to overcome the deep wounds of the war, implemented and implement numerous projects. Thank to that trinity we have entered a stable stage. We have said that the Artsakh movement was one of the greatest feats of the Armenian people. Today I announced from here that Artsakh is ready to implement its share of mission with confidence, creating necessary conditions for future victories. Greeting the Prime Minister of Armenia, our sisters and brothers, I want to say that our path is irreversible. We will pursue our tasks and dreams and will make consistent efforts f0r the international recognition of Artsakh, coming closer to our dream of having a united motherland”, Pago Sahagian said.

Edited and translated by Dikran Sireganian