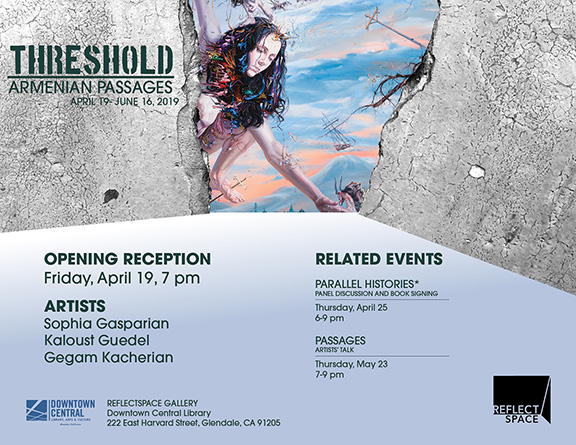 GLENDALE—”Threshold: Armenian Passages” explores the idea of a threshold as a physical, emotional and historical passage. This exhibition reflects on the migratory restlessness of the Armenian Diaspora. Thresholds happen at the beginning as well as the end of journeys: often ambiguous crossings that embody all the experiences of the before and after.

ReflectSpace Gallery has commissioned three contemporary artists–Sophia Gasparian, Kaloust Guedel, Gegam Kacherian—to create new work and site-specific installations to reflect on this idea of a threshold, specifically sourced and reflecting on their own personal experiences as global citizens and Armenians who share similar journeys. The Gallery is located inside the Downtown Glendale Central Library, 222 E. Harvard Street.

The exhibition will run from April 19 to June 16, with an opening reception to take place from 7 to 9 p,m on April 19 at ReflectSpace Gallery.

The programmatic element of the exhibit will include a curatorial talk at 6 p.m. on Thursday, April 25, which will be followed by presentation at 7 p.m. entitled, “Parallel Histories,” during which artists and scholars drawn from two years of ReflectSpace exhibitions consider their interconnected histories of injustice.

On Thursday, May 23 at 7 p.m. Gasparian, Guedel and Kacherian will reflect on their work and life journeys.

This exhibition is made possible with support from the Glendale Library Foundation.

About the Artists
Sophia Gasparian
Social identity, dislocation, human and woman’s rights are integral parts of Sophia Gasparian’s consciousness and artwork. Both intertwine in unexpected and surprising ways creating a narrative that is at once steeped in sociopolitical critique but also strangely childlike. She employs caricature, stencils, stickers, spray paint, and nontraditional media as if she is on the street, painting on walls. Gasparian’s journey started in Armenia and landed her in Los Angeles where her work has evolved to incorporate subtle but effective elements of her culture, as well as her immediate surroundings. For Threshold, Sophia will install a mixed-media mural that is semi auto-biographical while also providing a glimpse of the contemporary arc of Armenian history.

Kaloust Guedel
Kaloust Guedel is an artist, curator and progenitor of an art initiative called “excessivism” which is a direct critique of the excesses of Capitalism. His work takes many forms—painting, sculpture, installation, and public art—but always with a social and political undertow. Often he employs translucent material and vivid colors using vinyl as a surface: stretched, painted and extended as a sculptural form into space.

Guedel’s work tends to be abstract which allows him to explore boundaries of all types: physical ones between materials like painting and sculpture or spiritual ones between ideas of being and becoming. Kaloust’s journey began in Cyprus and continues now in Los Angeles. His installation for Threshold will reflect on his multi-continent passage and exploration of borders.

Gegam Kacherian
One would be hard-pressed to classify Gegam Kacherian’s work. Hallucinogenic? Psychedelic? Dreamlike? His paintings are dynamic compositions that defy fixation. All is in flux and in motion—what seems like a fixed element, like a person, a building or animal, will often morph into splotches of color or clouds or get lost into a vortex of paint-space-time. There is a certain liminal presence in Kacherian’s work, a here and not-here, elements in his paintings seem to cross hidden thresholds and either get lost completely or reappear elsewhere. This kind of in-betweeness is part of his journey as an artist and an Armenian. This is at the core of the work that Kacherian is producing for Threshold: a massive 3-canvas piece, nearly 12 feet in length.

ReflectSpace is an inclusive exhibition gallery designed to explore and reflect on major human atrocities, genocides and civil rights violations. Immersive in conception, ReflectSpace is a hybrid space that is both experiential and informative, employing art, technology and interactive media to reflect on the past and present of Glendale’s communal fabric and interrogate current-day global human rights issues.