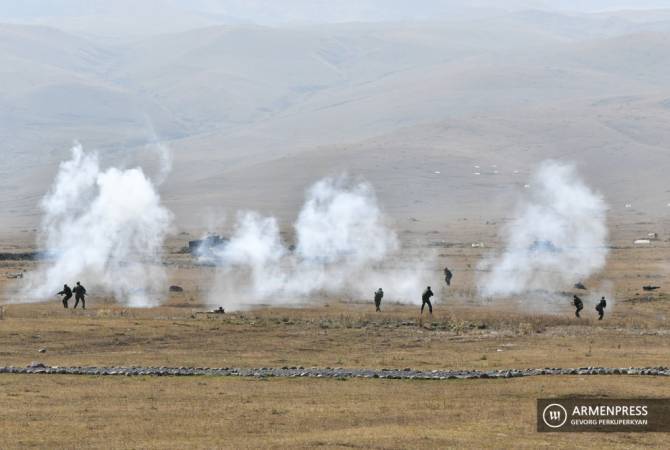 For the past two weeks or so I’ve been trying to put words on paper and write something about the Azeri aggression against the Armenians in Nagorno-Karabakh. Like many of my compatriots I’ve been glued to the internet waiting for news from our homeland. It’s hard to write when the pain is so immense and the Armenian cause so dear to my heart.

On Sunday September 27, in the early hours of the morning, Azerbaijan bombed Nagorno-Karabakh, targeting the civilian population in the capital Stepanakert. Thus started yet another military aggression against Armenians, only this time with the full military support of Turkey operating drones and flying its F-16 fighter planes in Armenian airspace. Furthermore, Turkey has paid mercenaries and transferred jihadi extremists from Syria to fight alongside the Azeris, something that Turkey denied doing.

Several jihadist men told The Guardian that they were offered around 10,000 Turkish lira (£1,000) a month by the Turks for their service and that they were transferred from Syria to Turkey and then to Azerbaijan. Data from the Flight Radar website, sent to the Guardian, confirmed this.

However, on Monday October 5, after meeting with Turkish Prime Minister Mevlut Cavusoglu in Ankara, NATO Secretary General Jens Stoltenberg, observing Turkey’s role in counterterrorism, affirmed the bloc’s support for Turkey saying that NATO’s security interests are synonymous with those of Turkey.

Counterterrorism? Security interests? Turkey? It was only last week that Turkey banned the delivery of 100 tons of US humanitarian aid to Armenia through its airspace. If this alone is not an anti-humanitarian act, then what is?

Is Jens Stoltenberg that ignorant? Has he heard or learnt nothing of the Armenian Genocide in 1915? The atrocities that the Turks committed against the Armenians? The great-grandfathers and grandfathers of this NATO Secretary General’s so-called counterterrorist Turks killed one and a half million Armenians. They rounded up all the men from Armenian villages, herded them into concentration camps and bayoneted them. Then they gathered their women and children and set fire to them. They raped young girls and women in front of their husbands and fathers. In some towns after killing the men they marched the women and children to a gorge overlooking the Euphrates, tied their hands behind their backs and pitched them into the gorge. And what about the heinous death marches that the Turks forced hundreds of thousands of Armenians into through the Der Zor desert? Our stories are endless.

No matter how much the Turks or the rest of the world deny the Armenian Genocide, the genocide is scorched into every Armenian’s soul. Genocide survivors have passed on their horror stories to following generations. Every Armenian has a story to tell. My maternal great-grandfather was taken from his home by the Turks and killed. My grandparents and great-grandparents fought the Turks in Musa Dagh.

Unfortunately, 105 years later, they are still using the same barbarous tactics against the Armenians in Karabakh. Bombing churches, bombing hospitals, killing civilians. Nineteen-year-old Armenian soldier Garik Achemyan was skinned alive by the enemy, dismembered and his body parts sent to his mother in a box. He is one of many to be skinned alive, tortured, brutalized, executed. And the world is silently watching in the same way they did in 1915. This war is not a just war, as it is not a religious war. It’s a war of survival. Armenia is fighting Azerbaijan, Turkey, and the jihadists, all alone, while the world is watching.

In his article in The Sunday Times on October 11 2020, titled “Turkey’s Game is Lethal, as Johnson well knows,” Dominic Lawson writes:“Try to imagine, if you can, Germany intervening militarily in a dispute between Israel and the Palestinians by sending mercenaries to fight against the Jewish state, using its fighter planes to down Israeli ones, and drones to bomb civilian areas. It is impossible to imagine, because modern Germany is profoundly conscious of its historical record and the associated moral responsibility: Holocaust denial is a criminal offence, and Berlin has many memorials to the Jewish victims. The exact opposite, in fact, of Turkey, where article 301 of the penal code makes it an offence to refer to the coldly planned and executed mass murder of its Armenian population in 1915 as “genocide” and where even great novelists such as Orhan Pamuk and Elif Shafak have faced prosecution for allowing their fictional characters to speak in such terms.”

In another newspaper, the Toronto Sun, on October 7, Tarek Fatah published an article calling to “Expel Turkey From NATO”:“As the clashes between both sides took shape in a land and air war, all major nations called for an immediate ceasefire, except Turkey that opened its borders to let Syrian and Pakistani jihadi fighters to join the ranks of the Azeri Turkish regular army.

Turkey’s Erdogan denounced the call for a ceasefire and, according to reports, has lent its US-supplied F-16s to Azerbaijan’s forces along with drones that are equipped with Canadian technology. This forced Ottawa to act. On Oct. 5, Foreign Affairs Minister Francois-Philippe Champagne halted all military export permits to Turkey. The reaction by Turkey was swift. The foreign ministry in Ankara accused Ottawa of “double standards” arguing: “There is no explanation for blocking defence equipment exports to a NATO ally while.”

NATO ally? That’s quite rich for Turkey’s pan-Islamists to invoke NATO as their defence.

The only role Turkey has played in NATO since the collapse of the USSR is that of a Fifth Column. A country that has been a conduit for ISIS jihadis, the Muslim Brotherhood. A country that deploys refugees to threaten Europe and Greece while occupying Cyprus and festering war in Libya, is no NATO ally. Time has come for Canada to ask for Turkey’s expulsion from NATO. Turkey is a menace to Greece, Cyprus, Egypt, Syria and Libya. It has eyes on Bulgaria, Rumania and the Balkans, which it had to relinquish in the Lausanne Treaty that is approaching its centennial. Don’t be surprised if Erdogan annuls the century-old treaty to re-establish the Ottoman Caliphate that will make Central Asia its Turkic backyard after Armenia, the only obstacle, is eliminated.”

True. Armenia is an obstacle to Turkey’s future plans. What the Turks couldn’t do in 1915, namely, annihilate us the Armenians, they are doing now by the hands of their puppets, the Azeris and jihadist extremists. For us this is a war of survival. It is genocide all over again. And the world is once again silently watching. As Dominic Lawson from The Sunday Times writes:

“By contrast, the silence of the British government is shameful. Especially so because the extraordinary Armenian nation — the first to become officially Christian, long before the Roman empire — had always held a fascination for a certain sort of Englishman. Lord Byron declared that “Armenian is the language to speak with God” (and tried to learn it, for that purpose). William Gladstone said that “to serve Armenia is to serve civilisation”.

In the words of Elie Wiesel:

“We must take sides. Neutrality helps the oppressor, never the victim. Silence encourages the tormentor, never the tormented. Sometimes we must interfere. When human lives are endangered, when human dignity is in jeopardy, national borders and sensitivities become irrelevant. Wherever men and women are persecuted because of their race, religion, or political views, that place must – at that moment – become the center of the universe.”

Help us spread awareness and stop this war! Help us teach the likes of Jens Stoltenberg and the world what counterterrorism really means! Help us put an end to human suffering.