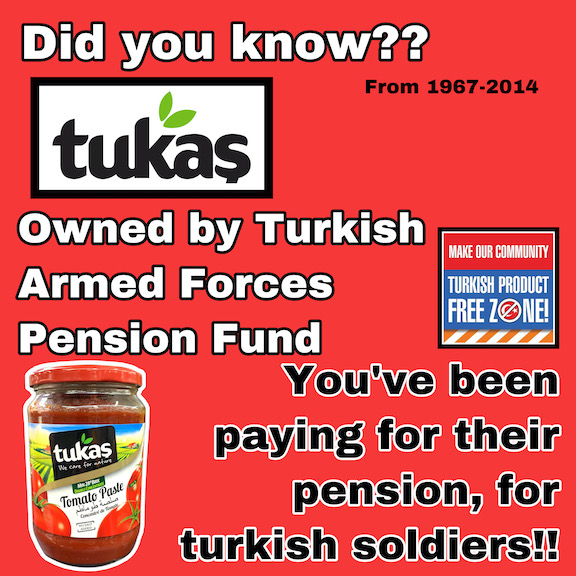 These are some of the things you hear when you confront consumers, store owners, or importers with the same question: Do you intend to stop selling Turkish products?

It’s a simple question, that has a simple solution… Just Stop!!!

Over the years, countless attempts have been made to resolve this wrong. Some led by the youth, such as the AYF and some led by the elderly, such as the women who went to Super King armed with paper and pen going isle to isle and writing “MADE IN TURKEY” on a piece of paper and taping it on the shelf above the Turkish products. Have these movements been successful? They have certainly had an affect on the individual, but have they properly addressed the overall problem, have they changed the rampant apathy that is present in our community?

What is so bad about purchasing Turkish products?

Well for one, you are helping the Republic of Turkey generate tax revenue that is used to commit crimes against humanity. Now we all know that the genocide happened over a hundred years ago, but did it really ever stop? Have the Turks finally established a government that protects the rights of its citizens, the rights of its minorities, have they addressed their wrongs? Has the Turkish government made amends with its past and paid its debt to the Armenians that it tried to annihilate? Has Turkey matured enough to know that killing minorities and appropriating the culture, history, artifacts, churches, and schools of the rightful inhabitants and descendants of the land they occupy is wrong? I think not.

It is unfortunate that only a handful of Turks have come to terms with their past and have presented a willingness to address the wrongs of their nation. Every single day the government of Turkey engages in cultural appropriation, persecution of religious and ethnic minorities, destruction of the cultural heritage of the true inhabitants of the Armenian Plateau, the Armenians, and other crimes against humanity.

When you purchase tomato paste that is made in Turkey, you are not just purchasing something to eat, you are subsidizing all the evil deeds that the Turkish government engages in.

When you buy Tukas, the most popular brand of Turkish tomato paste, you are helping Erdogan erase your past and shape the present, a world where Armenians, Greeks, Assyrians, and Kurds do not exist. A world where the Turkish empire extends from the Mediterranean to Mongolia, unifying Turkic peoples and nations to form a Pan Turkic empire. An empire that glorifies tormenting minorities and Islamic extremism. The modern republic of turkey is responsible for many crimes against humanity, the holocaust at Smyrna, the attack on Dersim Kurds, the occupation of Cyprus, ,the assassination of Hrant Dink, and the destruction of Armenian cultural artifacts , churches and cemeteries.

Tukas tomato paste, for example, is a Turkish company that was owned by the Turkish Armed Forces Pension Fund between 1967 and 2014. If you purchased Tukas tomato paste between those years, not only did you contribute to the tax revenue of the Republic of Turkey, you literally funded the retirement of the soldiers serving in the Turkish Armed Forces. Imagine that, a displaced Armenian, forcibly removed from their ancestral homeland, living thousands of miles away from the Armenian Highlands where they lived for thousands of years, and taking their hard earned dollars to the “Armenian” grocery store and making a donation to the pension fund of the Turkish soldiers currently occupying and pillaging their land.

The Ulker company’s headquarters are built of historic Armenian lands

Another Turkish product that is found in virtually all NON Turkish Product Free Zone stores are the ULKER brand crackers. A seemingly harmless product, just a few biscuits from the far east you might say. Well the truth is far worse. The Ulker company is a prime example of what happened to our stolen properties and how little the Turkish government has done to make amends. The Ulker company has a factory that is built on stolen Armenian Land. This is stolen Armenian land that belonged to the Armenian Church. After the genocide and the forced removal of our people, the property was controlled by the state, which later sold it to the Ulker company. The factory is literally built atop an Armenian cemetery. Not only did they kill and displace the living, they also dishonored the sacred hallowed ground of the cemetery and built a cracker and biscuit factory atop. It pains me to see an Armenian in a grocery store picking out this particular brand of biscuits to enjoy with their cup of tea. Is it really that hard to find another brand of biscuits, is the flavor and taste so out of this world that it is worth purchasing products from the people that desecrate our dead.

Turkey is a large country with a sizable economy. Will a few Armenians not purchasing a few crackers or a few jars of tomato paste bring down their economy? Probably not. Is it the right thing to do? Yes. Will the concerted efforts of all those that have felt the blade of the Turks on their necks, the Armenians the Greeks, the Kurds, the Lebanese the Syrians the Cypriots, deciding not to engage in commerce with a republic that has proven to be uncivilized and a destructive force in the region and the entire world, year after year, decade after decade, century after century, make a difference and change the overall dynamic? I think it will.

Purchasing Turkish products is a statement, it is a clear sign of a lack of a moral compass, it emboldens and enables Turks to continue pillaging, destroying and appropriating our culture without any ramifications. Not purchasing Turkish products sends a clear statement to the Turks and to the world, actions have consequences and until the wrongs of the past and present are addressed, we as human beings will not stand idly by and do nothing, we as a community believe in our right to return to our homeland and demand recognition, restoration and reparation for all past and present crimes.

These stores are some of the Turkish Product Free Zones

If we cannot successfully remove Turkish products from our own stores who are we to demand that local and national entities and governments not invest and enable the Turkish state? How can we request that the state of California not invest its pension fund in Turkey? How can we file law suites against the US government for building an air force base atop stolen Armenian property (Incirlik US Air Force base). How can the Greeks demand for a unified and unoccupied Cyprus? We must end the hypocrisy and remember that demanding justice for the genocide is not accomplished by merely showing up at the Turkish consulate with an Armenian flag, but is accomplished through our own decisions and consumer choices as well.

Over the past few months, we have seen about 20 stores pledge to become “Turkish Product Free Zones” and remove products made in Turkey from their shelves. There is still a long way to go, but the simple act of asking your grocer if they have considered removing their Turkish offerings is sometimes all it takes. There are “TPFZ” Facebook pages popping up all over the world and hopefully soon we can proudly say that products made in turkey are not sold in community. You don’t need to sign up for anything, you don’t need to join any organization, all you have to do is be an informed consumer and educate those around you.

We are the descendants of people with thousands of years of remarkable accomplishments and contributions to the world, if we keep buying and selling Turkish products, we dishonor the past, present, and the future. If someone came to your home and forced you to live in one corner while the other 90 percent of your house as a factory, would you turn around and pay them to purchase products produced there? I think not. We are wise, we are cunning and we are innovative, I don’t see why we cannot come up with alternatives to these products.

The choice is yours, and what you do today will affect you and yours for years to come. Don’t be surprised if one day the turks tell you that they are natives of that land, and that Tigran the Great was a Turk. I know it seems ridiculous, but is it really more ridiculous than an Armenian purchasing Turkish products?