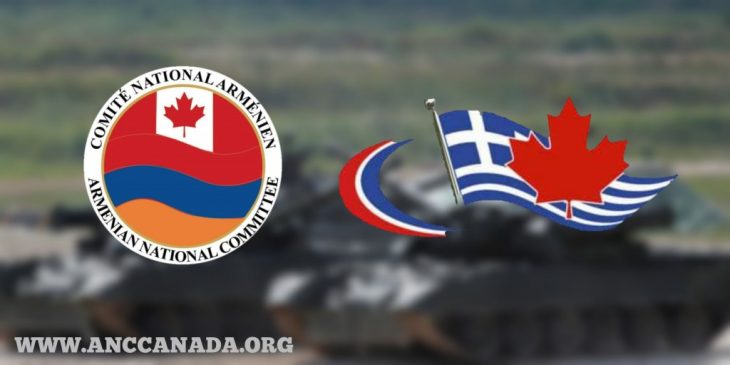 On July 30th, 2020, the Armenian National Committee of Canada (ANCC) and the Canadian Hellenic Congress (CHC) sent a series of joint letters to Canada’s top defence manufacturing companies, sharing their views on the latest developments dealing with the Republics of Turkey and Azerbaijan and urging industry leaders to refrain from initiating business with Ankara and Baku.

“The Republics of Turkey and Azerbaijan have long been infamous for their destabilizing foreign policies and deplorable human rights records at home. With rapid militarization and constant warmongering, Turkey and Azerbaijan pose a significant threat to safety and stability in their immediate regions and the global stage.” read a part of the letter sent to over thirty leading manufacturers across Canada.

In October 2019, following Turkey’s invasion of northern Syria, Canada placed a temporary ban on new permits bound for Ankara. The ban was extended in April 2020 with minor revisions to the initial decision. Furthermore, according to the annual Arms Export Report published by Global Affairs Canada (GAC), during the 2018 and 2019 fiscal years, Canada did not sell any arms to the Republic of Azerbaijan.

The ANCC and the CHC, along with partner organizations played a frontline role in ensuring that Ottawa refrains from allowing highly-sophisticated weaponry and advanced Canadian technology to be at the disposal of armies serving the interests of tyrants such as President Erdogan of Turkey and his counterpart in Azerbaijan, Ilham Aliyev.

“While we applaud the decisions made by the Canadian Government to refrain from selling arms to such countries, we are hopeful that the private sector will become the government’s partner in promoting a more safe and stable global community, devoid of military aggression and gross human rights violations.” said the letter signed by ANCC Co-Presidents, Hrag Darakdjian and Shahen Mirakian and CHC President, Theodore Halatsis.

“We strongly believe that as Canadians – whether we serve in the public or private sectors – we have a duty to ensure that Canadian goods and technology do not create more opportunities for tyrants to advance aggressive policies and victimize innocent civilians around the world.” concluded the letter.

On June 4th, the ANCC sent a similar letter to Canada’s Foreign Minister, the Hon. François-Philippe Champagne, commending the government’s decision and urging the Minister to uphold  it.

The ANCC is the largest and the most influential Armenian-Canadian grassroots human rights organization. Working in coordination with a network of offices, chapters, and supporters throughout Canada and affiliated organizations around the world, the ANCC actively advances the concerns of the Armenian-Canadian community on a broad range of issues and works to eliminate abuses of human rights throughout Canada and the world.