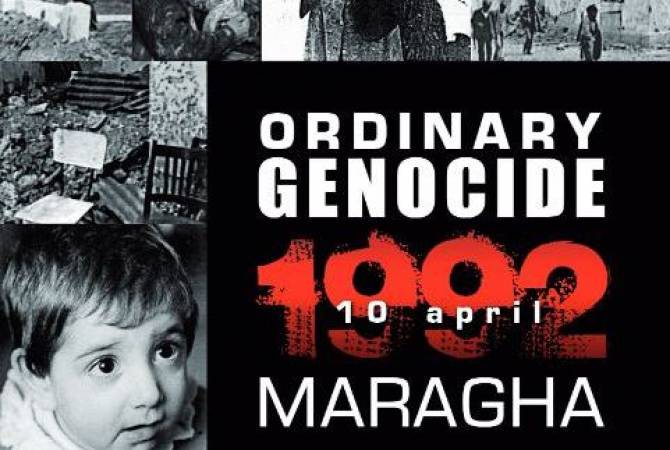 Considering the documented data and the eyewitness accounts it must be indicated that what happened in Maragha on April 10, 1992, fully corresponds to the military crime and genocide terms, Ashot Melian, Deputy Head of the Artsakh Republic Representation in the Republic of Armenia, said during the public hearing dedicated to the 27th anniversary of the massacre in Maragha on April 10, at the Armenian Genocide Museum-Institute, reports Armenpress.am

Melyan stressed the fact that Shahin Taghiyev, the commander of “Gurtulush” military unit was awarded the title of “National Hero of Azerbaijan” for his involvement in the Maragha Genocide. “It’s a proof of not only the encouragement of these actions by the Azerbaijani authorities but also the deliberate Armenophobia policy”, Melian stated.

Recalling the brutal murder of the Armenian officer in Budapest and the glorification of the perpetrator, Melian noted that the atrocities committed against the Armenian civilians during the April war are the logical continuation of the Maragha Genocide. According to Melian, we must not forget that the Nagorno Karabakh conflict still remains unresolved, and the Azerbaijani authorities continue the anti-Armenian propaganda among their own population, provide their army with weapons not giving up on the option of the forceful resolution of the conflict.

“We must be vigilant and cautious, ready to deliver a counterattack if needed in order to prevent this kind of crimes from happening”, Melian noted.

Ashot Melian also underlined that the authorities of the Republic of Artsakh have regularly raised political assessment about the Maragha Genocide on the level of the President, the Speaker and the Minister of Foreign Affairs.

“Due to the efforts of the authorities and the “Hayastan” All Armenian Fund, the village of Nor Maragha is gradually being developed, where since 1995 a few of the survivors of the Maragha massacre have been settled”, Melian added.

According to Human Rights Watch/ Helsinki Watch, as a result of the genocidal acts committed by the Armed Forces of Azerbaijan, 50 civilians were killed and 50 were captured from 118 peaceful residents in Maragha. Some of them were later exchanged, whereas the fate of the 19 people from Maragha still remains unknown.