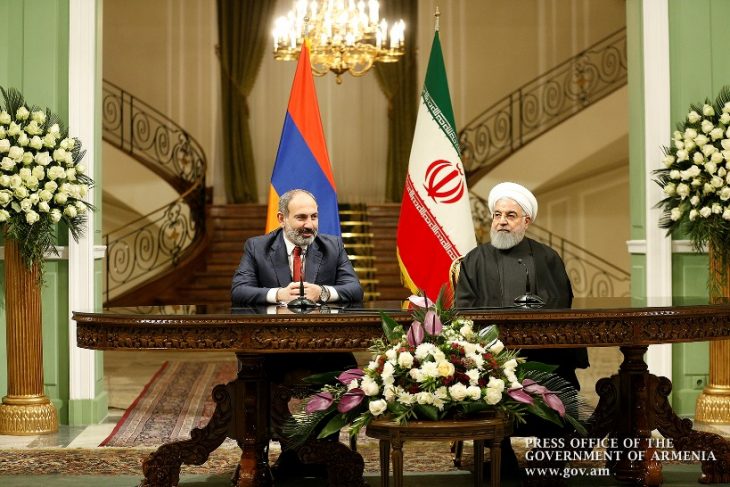 President Rouhani thanked the Armenian PM for accepting the invitation and visiting Iran. “Welcome to Iran. I congratulate you on the changes that took place in Armenia that were demonstrated through a democratic way. Our historic relations have always been friendly and we want to further strengthen and develop them. Iran is always willing to have good relations and continue these relations with neighbors, namely with Armenia. I am sure that your visit to Iran will contribute to further developing the bilateral political, economic and humanitarian relations,” Rouhani said.

Pashinian thanked the Iranian president for the invitation and the warm reception, and said: “Iran is close to our country not only in terms of geography, but also friendly relations, and we’ve had numerous occasions to emphasize the importance of these ties. Highly important changes are taking place in Armenia, which are entirely domestic processes, and no foreign power has been involved in our country’s political processes. This is a principled point for understanding the processes that have taken place. I am sure that new opportunities have opened also in terms of our relations, and we have political will to realize them,” Pashinian said.

Pashinian emphasized that this is his third visit to Iran, first as a reporter, second as a lawmaker, and the third and current one as a prime minister.

Pashinian also noted the warm attitude for the Armenian community in Iran.

“This too strengthens our friendly attitude towards Iran. During our one-on-one meeting we discussed important issues, I hope that we will be able to reach the solution of a part of these issues during this visit,” the Armenian PM said.

President Rouhani expressed certainty that both sides’ political will is sufficient in order for the Armenian-Iranian relations to continue strengthening.

The sides expressed certainty that not only will Armenia and Iran maintain the high level ties based on mutual trust in the future, but will also enhance and deepen them.

Speaking about the bilateral economic agenda, Pashinian and Rouhani highlighted the construction project of the third 400KW Iran-Armenia power transmission line, which will enable enhancing electricity and gas exchange volumes between the two countries, thus contributing to the development of economic relations and expansion of regional cooperation in this sector.

Pashinian and Rouhani also attached importance to the realization of the Meghri HPP project and agreed to take practical steps in this direction soon.

The sides concurred that the bilateral trade turnover volumes aren’t as high as the level of political relations. They said that both countries should do their best for enhancing bilateral trade volumes and boosting mutual investments.

In this context, Pashinian spoke about the Armenian government’s actions that are aimed at making the investment climate more favorable and attractive.

In terms of boosting bilateral and regional commercial ties, the sides attached importance to the ratification of the Eurasian Economic Union-Iran agreement by parliaments. Pashinian and Rouhani expressed conviction that this deal will create new opportunities for maximally boosting trade-economic relations between Armenia and Iran. They said it would be useful to conduct exhibition fairs of Armenian and Iranian products and organize business forums in Tehran and Yerevan after the agreement enters into force completely.

The development of international transportation corridors was highlighted as an important sector of cooperation, as well as the possible participation of the Iranian side in the construction of individual sections of the North-South Road Corridor in Armenia.

During the expanded-format meeting the energy and transportation ministers of the two countries presented details over discussions aimed at developing cooperation.

Pashinian and Rouhani also attached importance to the active work of the Armenian-Iranian inter-governmental  commission and agreed to conduct the next session of the commission in the upcoming summer. They also spoke about opportunities for boosting partnership in agriculture and enhancing volumes of meat exports from Armenia to Iran.

Opportunities for enhancing cooperation in IT, healthcare, tourism, nature protection and humanitarian sectors were also discussed.

Pashinian emphasized that the Armenian-Iranian cooperation is contributing to strengthening of regional peace and stability and added that Armenia appreciates Iran’s balanced stance in the NK conflict settlement issue.

The Armenian prime minister and the Iranian president concurred that a comprehensive and long-lasting settlement of the NK conflict is possible exclusively through a peaceful way, in the format of the OSCE Minsk Group – the only internationally recognized structure dealing with the conflict resolution.

In this context, the sides also exchanged views on other issues of regional significance.

At the end of the meeting the Armenian and Iranian leaders tasked their Cabinet members to continue active discussions in accordance to sectors in order to have concrete agreements until the upcoming inter-governmental sitting.