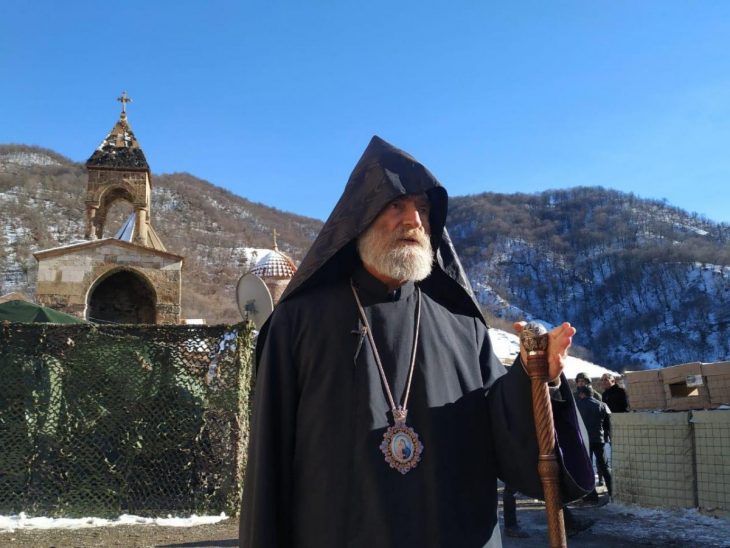 Archbishop Barkev Mardirosian was the primate of the Diocese of Artsakh for nearly 33 years, living through three wars in Nagorno-Karabakh/Artsakh, and he says the one in 2020 that ended in November was by far the worst because of the lethal weaponry and armies involved, the World Council of Churches (WCC) reports.

“In 1989, I was sent to lead the Artsakh Diocese, which was then part of the Soviet Union,” said Archbishop Barkev, who retired from his position in January due to health reasons and is now based in the Mother See of Holy Etchmiadzin.

The 44-day conflict in Nagorno-Karabakh saw the use of drones, artillery, and missiles. And Archbishop Pargev remembered that in 1993 he worked with the World Council of Churches (WCC) during its mediation role in what was internationally known as the First Nagorno-Karabakh War.

“I remember it well when Vazgen I was Catholicos,” and involved the Muslim leadership in the area “to bring peace to the nations through the spiritual leaders.”

That was not long after Armenia declared its independence from what had been the Soviet Union.

In the 1992 war, the Armenian forces marked their first major victory on 8–9 May, when they took over Shushi, the region’s historic city.

To his great sadness, the Armenian Apostolic Cathedral in Shushi was destroyed by rockets and drones and desecrated by invading soldiers during the most recent war. The Church of John the Baptist in the region’s second largest city was also destroyed.

When the 2020 Nagorno-Karabakh War between Armenia and Azerbaijan began, Archbishop Pargev made a public statement to the Armenian people, calling for strength and unity in the face of the war.

“The mission of the church is the same mission, which comes from history; to bring for our people faith, hope and to help them, to gather them, to bring them humanitarian aid, to encourage them, pray with them and help in any way; to be with them.”

“During this war, we saw thousands of officers and soldiers from Turkey. We saw many international terrorists, extremists; I think it was 4,000 terrorists against us.”

He does not see the 2020 conflict as a war around religion as depicted by some media.

“It was an ethnic war. The reason this conflict was born was due to a basic human rights problem stemming from great pressure from the authorities in Baku on the Armenian people in Artsakh,” said Archbishop Barkev.

He notes that Turkey helped Azerbaijan along with Pakistan during the latest war, “and they used many modern new kinds of weapons, rockets, and drones from Russia, Belarus, Israel, and Turkey.

“It was the most dangerous war I saw during my 32 years.”

Archbishop Barkev considers the area he served for 32 years as his home and shows great sadness in his eyes when he talks of what has happened to it, although he is thankful he can visit Stepanakert, the capital city of Artsakh.