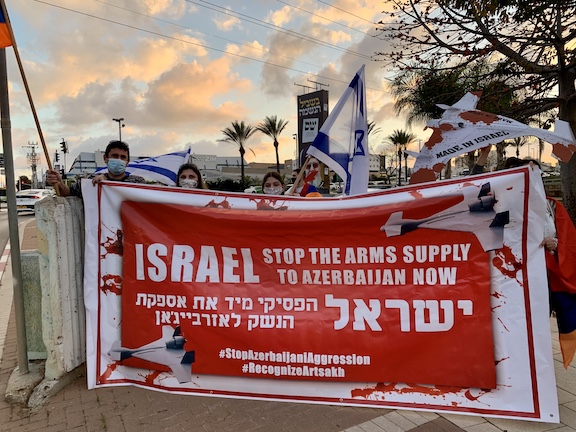 The Union of the Armenian Communities in Israel organized a demonstration on Tuesday to protest Elbit Systems, an international defense electronics company that manufactures weapons supplied to Azerbaijan.

As is well known, Israel supplies 60 percent of the Azerbaijani military’s armaments, including drones and deadly cluster bombs, which are banned by close to 100 nations. During the war in Artsakh (Nagorno-Karabakh), Azerbaijan used Israeli weapons to attack innocent civilians, including women, children, and the elderly, and to bomb hospitals and churches.

Presently, Israel’s defense industry is in the process of negotiating yet another arms deal with Azerbaijan, and Israel’s Armenian community cannot be indifferent to this. On Tuesday, Israel’s Armenian community gathered outside of Elbit Systems to demand that the Israeli government stop supplying weapons to Azerbaijan’s authoritarian regime, and reminding them that, with its growing Islamic fundamentalisms and intolerance towards national minorities, Azerbaijan is an unreliable ally for Israel itself.