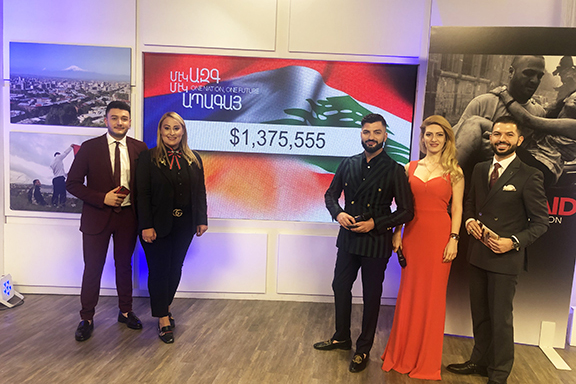 The Pan-Armenian Council of the Western United States is immensely grateful to the Armenian-American Community for its outpouring of generous support to our August 30 HyeAid Lebanon fundraising telethon under the theme of “One Nation, One Future.”

In a short four-week period and during a telethon that lasted for only three hours, an impressive total of $1,375,555 was pledged. To date, 85 percent of this amount has been received, with the balance expected to arrive shortly. An initial $500,000 transfer has already been made to the special bank account that has been assigned by His Holiness Catholicos Aram I for the Lebanese-Armenian Reconstruction Committee.

The total expenses incurred while realizing the fundraising – including social media advertising, technical and production support for the telethon, portal and credit card processing fees, and other telethon related charges are $44,272. We recognize that this amount would have been far greater had it not been for the countless hours that our tireless community volunteers put into the effort. Their selfless dedication has been immensely inspirational and invaluable.

Our united community has risen once again, and once again has exhibited its vigilance and generosity for the greater good of our national priorities.

The Pan-Armenian Council shall continue to remain vigilant in support of all Armenians in need, wherever they may be and whenever the necessity warrants.
PAN ARMENIAN COUNCIL OF THE WESTERN UNITED STATES OF AMERICA