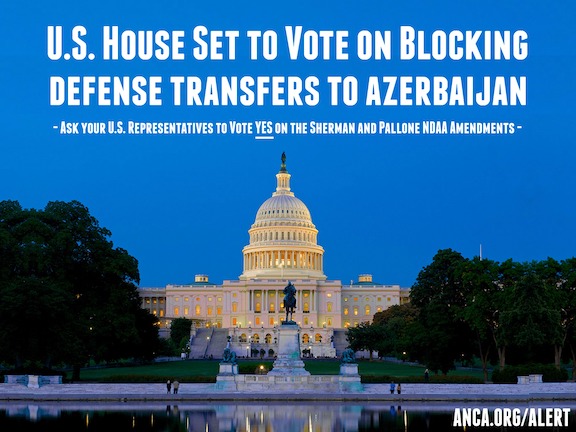 WASHINGTON—In the wake of the worst Azerbaijani cross-border attacks against Armenia in years, the U.S. House of Representatives is set to consider a number of pro-peace amendments to a major Pentagon authorization bill, including one that would block U.S. defense transfers to Azerbaijan, reported the Armenian National Committee of America (ANCA).

“With Azerbaijan escalating its cross-border attack, these amendments offer Congress the opportunity to confront and constrain Aliyev’s aggression,” said ANCA Executive Director Aram Hamparian. “As we approach Monday’s vote on these measures, we ask – with all urgency – that our friends and supporters call on their U.S. Representative to vote yes on the Sherman and Pallone amendments to the National Defense Authorization Act.”

Amendment #66 to the Fiscal Year 2021 National Defense Authorization Act (H.R. 6395), offered by Congressman Brad Sherman (D-CA), would mandate that “no funds authorized by this bill can be used to transfer defense articles or services to Azerbaijan unless the President certifies to Congress that the transfer of such defense articles or services does not threaten civil aviation.” The government of Azerbaijan has issued a standing threat to shoot down any civilian airplanes traveling between Armenia and Artsakh’s Stepanakert airport. This measure is cosponsored by Reps. Frank Pallone (D-NJ), Jackie Speier (D-CA), Adam Schiff (D-CA), and TJ Cox (D-CA)

Amendment #397, spearheaded by Rep. Frank Pallone (D-NJ) would require that the Defense Department submit a report to Congress on a U.S. military aid program (known as Section 333) that has sent over $120 million worth of defense assistance to Azerbaijan over the past several years. Congressman Pallone announced his amendment during a video interview with ANCA Government Affairs Director Tereza Yerimyan earlier today. This measure is cosponsored by Reps. Sherman, Speier, and Schiff.

House votes are expected on these amendments as early as the morning of Monday, July 20th.

To call on your U.S. Representatives to support the Sherman and Pallone amendments, visit anca.org/alert.

Since July 12, Azerbaijan has launched a series of cross-border attacks against Armenia’s northern Tavush region, resulting in 16 casualties to date, including Major Garush Hambardzumyan, Captain Sos Elbakyan, and Junior Sergeants Smbat Gabrielyan and Grisha Matevosyan from the Armenian Armed Forces.  While no Armenian civilian casualties have been reported, targets have included Tavush Textile, a factory which produced face coverings used during COVID-19 pandemic, forcing its closure to ensure the safety of its workers.

Just days prior to the attack, Azerbaijani President Ilham Aliyev called ongoing Organization for Security and Cooperation in Europe (OSCE) Minsk Group moderated peace talks regarding Artsakh “meaningless” and threatened to resolve the issue militarily.  The Azerbaijani Government has reportedly been fomenting protests in Baku, where sporadic angry mobs have urged military attacks against Armenia’s capital, Yerevan, and the Republic of Artsakh’s second-largest city, Shushi.