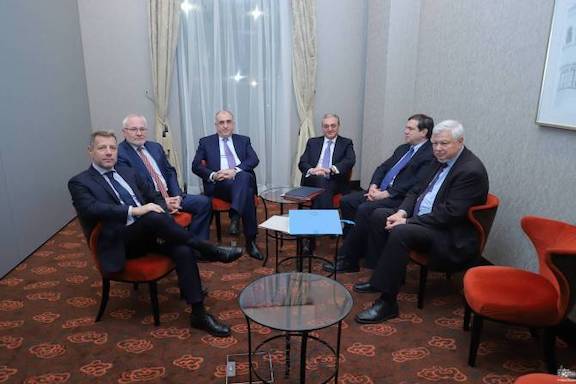 In the aftermath of Azerbaijan’s brazen attempt to breach the borders of the Republic of Armenia on Sunday, regional players have voiced their “concern” about the unrest, but as has been the case throughout the Karabakh conflict process, failed to condemn Azerbaijan for putting into practice its threats of war and efforts to resolve the issue through military force.

The Russian Foreign Ministry, the OSCE Minsk Group Co-chairs, as well as the leadership of the Collective Security Treaty Organization—the CSTO—all expressed concern about the attacks, but failed to distinguish that it was Azerbaijan that once again violated the ceasefire agreement. The false-parity exercised by the international community does little to quell conflict and hinders progress in the Karabakh settlement process.

Russian Foreign Minister Sergei Lavrov held phone conversations with his Armenian and Azerbaijani counterparts, Zohrab Mnatsakanian and Elmar Mammadyarov, with Moscow expressing “serious concern” and calling for an immediate end to the fighting along the Armenia-Azerbaijan border.

“We find a further escalation threatening the security of the region inadmissible,” the Russian Foreign Ministry said in a statement. “We are calling on the conflicting sides to show restraint and strictly adhere to the ceasefire regime.”

“For its part, the Russian Foreign Ministry is ready to provide necessary support for stabilizing the situation,” added the statement.

For its part, the CSTO, which is a Russia-led security alliance of which Armenia is a member, reached out to Armenian authorities to discuss the matter. The organization’s Secretary General, Stanislav Zas, spoke to Mnatsakanyan and called an emergency meeting of its Permanent Council. That meeting, however, was later postponed indefinitely, with Zas’ spokesperson telling Azatutyun.am that the CSTO Secretariat and member states need to ascertain the “format” of the discussion beforehand. The spokesperson did not say who initiated the postponement of the meeting.

In April, Zas directly addressed another Azerbaijani attack on military and civilian targets in Armenia’s Tavush Province, expressing concern “regarding this kind of an incident in the CSTO zone of responsibility—at the border of a member country of the organization.”

The CSTO had pledged that it would take necessary action in the event of military provocation against one its member states.

The OSCE Minsk Group Co-Chairs Igor Popov of Russia, Stéphane Visconti of France and Andrew Schofer of the U.S. released a statement Monday condemning the ceasefire violations at the Armenia-Azerbaijan border.

“The sides have accused each other of initiating the fighting,” said the co-chars. “The Minsk Group Co‑Chairs condemn the recent ceasefire violations and call upon the sides to take all necessary measures to prevent any further escalation, including by use of the existing direct communication channels between them.”

“The Minsk Group Co-Chairs also call on the sides to resume substantive negotiations as soon as possible and emphasize the importance of returning OSCE monitors to the region as soon as circumstances allow,” the Co-Chairs said in the statement.

The co-chairs statement comes a week after President Ilham Aliyev of Azerbaijan, in a nationally-televised interview, slammed  the co-chairs, calling their efforts for a peaceful settlement of the Karabakh conflict “meaningless,” and challenged their position on the inadmissibility of use of military force to settle the conflict.

Almost two weeks ago, the co-chairs stressed that there is no military solution to the conflict. They urged the sides to take additional steps to strengthen the ceasefire and to “prepare the populations for peace.”

While these entities have condemned the unrest, they have failed to properly condemn Azerbaijan for initiating the attacks. Furthermore, neither party addressed Ankara’s efforts to insert itself in the conflict by unequivocally defending Azerbaijan.

Turkey’s foreign ministry on Monday issued a statement decrying what it called“yet another manifestation of Armenia’s aggressive nationalism.”

“Turkey will continue, with all its capacity, to stand by Azerbaijan in its struggle to protect its territorial integrity,” said the Turkish foreign ministry statement.