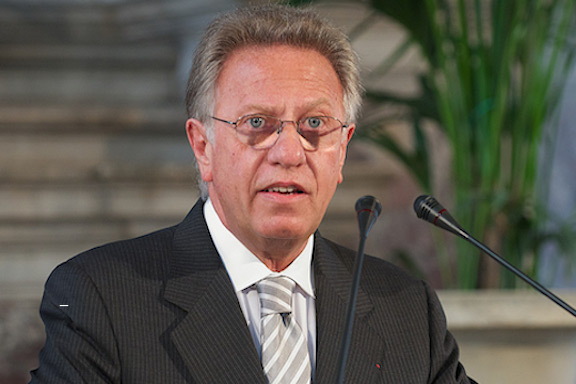 The president of the Venice Commission on Friday expressed regret that Armenian authorities actions to amend the country’s Constitution were not in line with the body’s recommendations and called for “the need to respect the Constitution.”

Gianni Buquicchio, the president of the European Commission for Democracy through Law, known as the Venice Commission, expressed his “regret” in a letter addressed to Hrayr Tovmasyan, now the outgoing chairman of Armenia’s Constitutional Court.

On Monday, the Armenian Parliament passed constitutional amendments that effectively cut short Tovmasyan’s chairmanship of Armenia’s highest court and mandated that two other judges serving on the court retire because, according to the measure, their tenure had exceeded the term limits envisioned in the constitution.

The amendments were approved only by the members of the ruling My Step faction, since the other two parties represented in parliament, the Prosperous Armenia Party and the Bright Armenia Party boycotted the vote because they opposed what they called the Prime Minister’s efforts to take over the country’s judiciary.

Prime Minister Pashinyan and his My Step party had sought to change the composition of the court, arguing that Tovmasyan’s and the other two judges tenure was illegal, thus scheduling a referendum, which was canceled due to the COVID-19 pandemic.

Instead they opted to resolve the matter through the legislature, after Armenia’s justice minister submitted the proposals for review to the Venice Commission, which detailed its recommendations in a 20-page response to the ministry.

“I have been following closely the developments in Armenia concerning the constitutional amendments. I regret that they are not in line with the clear recommendations of the Venice Commission,” said Buquicchio. “I cannot but recall the need to respect the Constitution. This is a basic requirement of the principle of he rule of law.”

Armenia’s Constitution stipulates that any amendments to the document must be reviewed and approved by the country’s highest court, a sentiment echoed by the Venice Commission.

Justice Minister Rustam Badasyan argued on Monday that presenting the amendments that impacted members of the Constitutional Court to the country’s highest judicial body would present a conflict of interest. Thus, despite strong opposition in parliament, the ruling party opted to vote on the amendments in parliament.

President Armen Sarkissian signed the measure, effectively beginning the process of changing the composition of the Constitutional Court.