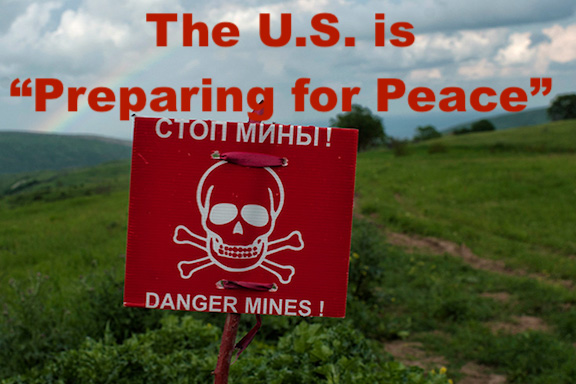 After months of dillydallying, the United States finally went on record, through its envoy in Armenia, Lynne Tracy, to announce that it was suspending life-saving humanitarian aid for Artsakh de-mining efforts and channeling those funds toward the opaque concept of “preparing populations for peace,” which in Karabakh conflict mediation parlance means forcing a generally pro-Azerbaijani concept down the throats of Armenians in Artsakh, Armenia and around the world.

“We are very proud of the work that we supported through the de-mining program to help in a humanitarian way the people of Nagorno Karabakh. We think the investment of $17 million dollars over nearly the past 20 years [only a fraction of the $4 million annual aid Congress has allocated for Artsakh over the years] has been extremely successful,” said Tracy on Thursday during a Facebook Live chat in response to a question from the audience.

Then she declared: “And so what we are starting to look at now as the de-mining—our involvement in the de-mining – has concluded is to turn to another area—preparing populations for peace, which is in support of the work of the Minsk Group, to see what kind of activities we can conduct in this space to help toward that goal of achieving a lasting peaceful settlement of the conflict.”

This means that our hard-earned tax dollars will now go toward causing injury or possible death of innocent civilians in Artsakh, a fraction of whom were actually engaged in the daily de-mining efforts carried out by The HALO Trust.

Instead, we, as Americans, will be paying for the nebulous concept of “preparing populations for peace,” in a climate where despite a call for a global cease-fire during the COVID-19 crisis, the Azerbaijani armed forces have not only not ceased their attacks on Artsakh military targets, but have continuously shelled civilian ones in Armenia, injuring soldiers, children and causing damage to property. At the same time, our tax dollars also will be spent on a $100 million increase in U.S. military aid to Azerbaijan, a fact omitted by Tracy during her presentation.

Of course, Ambassador Tracy, as a representative of a co-chairing country of the OSCE Minsk Group, had no words of condemnation toward official Baku, which at the time of the Facebook Live presentation, was wrapping up a four-day large-scale military exercises—war games—amassing heavy military equipment on its border with Artsakh and Armenia. On Monday, the Eurasia Daily Monitor reported that the official YouTube channel of Azerbaijan’s Defense Ministry featured a video showing Turkish-manufactured multiple-launch rocket systems (MLRS) stationed on the border of Armenia and Nakhichevan.

Why should that surprise anyone? Successive administrations have paraded a slew of diplomats with dubious ties to Turkish, Azerbaijani and Russian interests as the U.S. co-chairs of the Minsk Group. Matthew Bryza, James Warlick and Richard Hoagland come to mind as disgraceful representatives Washington appointed to mediate the Nagorno-Karabakh conflict.

Since the OSCE Minsk Group co-chairs, representing the U.S., France and Russia, took over the mediation of the Karabakh conflict settlement almost three decades ago, the “principles” or the proposals based on which the negotiations have advanced, all have aimed at cornering—or bullying—Armenia to make concessions, while Azerbaijan has fine-tuned a strategy of military build-up and rhetoric that saw its president, Ilham Aliyev, claiming on numerous occasions that Yerevan was part of historic Azerbaijan—a country that doesn’t appear on any map of the world until 1918.

This brings us to the extremely dangerous—and rather absurd—“Madrid Principles,” based on which the Karabakh talks have been taking place for the better part of a decade and a half. These principles call for among other provisions the “return of territories” to Azerbaijan; the return of “displaced” Azerbaijanis to their homes in Artsakh-proper; “preparing populations for peace”; and (time permitting) a determination of a status for Artsakh. (Incidentally, this is the very solution official Ankara was calling for as a pre-condition to signing the even more dangerous Turkey-Armenia Protocols). All of these provisions ignore the free will of the people of Artsakh.

At the time the sides agreed to use the “Madrid Principles” as a basis for the Karabakh settlement talks. Since then, however, we have seen that this formula simply doesn’t work. Not only does it not work, it provides the co-chairing entities—U.S., Russia, Europe—with ammunition to advance their regional agendas, most often knowing full-well that by doing so they will be sowing domestic instability, which again is preferable for these powers to push their plans forward.

Since the introduction of the Madrid Principles, Azerbaijan has paraded the ax-murderer Ramil Safarov as a national hero; has continually violated the cease-fire agreement resulting in the deaths of hundreds of Armenian soldiers; and staged a full-throttle attack on Artsakh in April 2016, the ramifications of which are still felt on the ground every day. Azerbaijan has also bolstered its military by upping its defense spending. The $100 million the U.S. is allocating for military assistance to Azerbaijan dwarfs in comparison to the $5 billion Baku is spending to acquire arms from Israel.

This September, Artsakh will mark the 28th anniversary of its declaration of independence from the Soviet Union. Despite all our war and daily military threats, the people and authorities of Artsakh, with the engagement of all Armenians around the world, have adopted and strengthened democracy in Artsakh (without any financial assistance by the U.S.), the most recent example of which were the presidential and parliamentary elections that saw the inauguration of a new president and a convening of a new National Assembly on Wednesday.

Artsakh was liberated—fair and square—by our fellow Armenians who sacrificed their lives for the homeland. Today, the Artsakh borders are being protected by a new generation of soldiers, some of whom are the same age as those here who are upset that their high school graduation has been interrupted by COVID-19. These soldiers told me when I visited the border post in Talish, Artsakh a few years back that they were born on that soil and they will die for it and on it. One of them might have been Taron Poghosyan, the unlucky soldier who died a few weeks back because he stepped on a mine.

I am prepared for peace. Aren’t you?