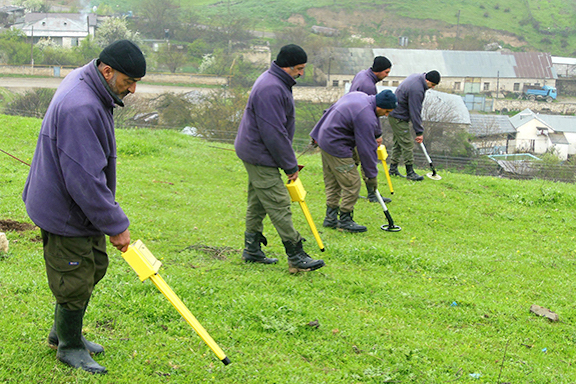 The Foreign Ministry of Artsakh on Monday commented on recent reports claiming that the United States has halted funding for de-mining efforts in Artsakh carried out by the HALO Trust. The Artsakh foreign ministry explained that an agreement with the U.S. Agency for International Development, which partially funds HALO’s de-mining efforts, was set to expire in 2020.

“The USAID funding for the humanitarian de-mining programs of the HALO Trust NGO in Artsakh was implemented in accordance with the planned schedule and budget, which expired in 2020,” said the Artsakh Foreign Ministry.

“However, humanitarian de-mining work in Artsakh is not complete yet, and mine hazards for the population of Artsakh remain. Humanitarian de-mining is essential for the people of Artsakh, as it ensures the security and mobility of the civilian population as well as creates conditions for economic and social activity,” emphasized the foreign ministry in its statement.

“In this context, it is regrettable that the decision to halt funding for the project has been made. However, it should be noted that the U.S. Congress continues the discussions on the U.S. Foreign Appropriations Bill for the next fiscal year, and 75 Congressmen have addressed a letter to the leadership of the Congressional Appropriations Committee, calling for 2021 budget to envisage funding for the continuation of de-mining activities in Artsakh,” added the foreign ministry.

“At the same time, representatives of the U.S. leadership have stated that they are considering the possibility of implementing other projects in Artsakh. We are hopeful that the U.S. Government will continue to support the implementation of other programs aimed at the development and solving humanitarian issues in Artsakh,” explained official Stepanakert.

“We would also like to use this opportunity to express our gratitude to the people and government of the United States for their continued assistance rendered to Artsakh for many years, thanks to which numerous projects have been implemented,” said the Artsakh Foreign Ministry.