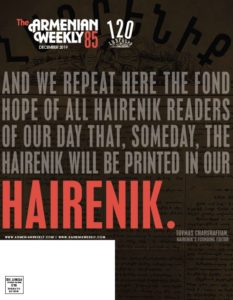 The first time I walked through the doors of the Hairenik headquarters in Watertown almost a decade ago, the unfamiliar building and its dedicated occupants felt strangely familiar. I almost instantly fell in love…

After our tour of the building, I asked a dear friend to snap a photo of me pointing at the “Hairenik” sign atop the side entrance of 80 Bigelow Ave. and uploaded it onto Facebook for the world to see. I captioned the photo, “If I had a choice, this would probably be my home.”

As fate would have it, years later, the Hairenik became exactly that: my home. It was there where folks who I only knew as names on paper and screen quickly became colleagues, dear friends, and mentors; where days turned into nights, where nights turned into days, and where I spent more time than at my own apartment; where I was able to make my dream of translating and publishing my favorite piece of Armenian literature into reality; and where I learned about our people’s storied history as much as I learned about myself.

And although I officially stepped down from my position at the Armenian Weekly well over a year ago, the Hairenik is the sort of institution one can’t simply leave or forget. It’s a family which spans generations and defies geography.

The Hairenik and its publications have reported on practically every major event in modern Armenian history since 1899. For many Armenians fleeing the Ottoman Empire before and during the Armenian Genocide, the publication became a lifeline to the homeland and even functioned as a bulletin board for those seeking information about loved ones lost amidst the massacres. It  continued its mission through two World Wars, reporting on the establishment of the First Republic of Armenia and its Sovietization, the Artsakh Liberation War, the catastrophic 1988 earthquake, the second independence of the Republic, and so many metamorphic moments of our collective story with such legendary names as Arshak Vramian (1900-1907), Siamanto (1909-1911), Simon Vratsian (1911-1914), and Rouben Darbinian (1922-1968) at its helm.

Today, 120 years after the establishment of the Hairenik and 85 years since the launch of its English-language counterpart, it is imperative to understand the significant place this storied institution occupies in the illustrious history of the Armenian nation

Through this issue, you will be transported to 1899 and learn about how the Hairenik came to life from its founding editor; you will read about the impact of the Hairenik publications on the greater Armenian community from two longtime contributors (Michael Mensoian and Matthew Karanian); you will get an inside look at the personal experiences of former editors of the Armenian Weekly during the tumultuous years of the Armenian armed struggle movement and Armenia’s devastating earthquake of 1988; you will learn about the Hairenik Newspaper Digitization Project, through which the entire archive of the Hairenik newspapers (Armenian and English) will eventually be made available to the public; and hear from another former editor, who starts important conversations about the future of our media.

Readers will also get a behind-the-scenes look at how the newspapers were put together seven decades ago, through an exclusive reprint of four fascinating photographs and read about the experiences of a current editor. Finally, for the first time in English translation, the 1934 Hairenik editorial announcing the creation of the English language newspaper and outlining its purpose is published in these pages.

Surely you noticed the quotation used on this issue’s cover page. Years after he passed the proverbial torch to other editors, Hairenik’s founding editor, Tovmas Charchafjian, was asked to recall the story of the founding of the newspaper for the publication’s monthly periodical. He concluded his account with the hope that the Hairenik would one day “be printed in our Hairenik (the homeland)” and return “home.”

That hope remains the same for many of us dreamers.

Until that glorious day, the Hairenik publications will continuously offer that piece of home, that piece of the homeland, and, with your loyalty, remain unhampered by the threats that may confront it.

Rupen Janbazian is the former editor of The Armenian Weekly. His writings primarily focus on politics, human rights, community, literature, and Armenian culture. He has reported from Armenia, Artsakh (Nagorno-Karabagh), Turkey, Canada, the United States, and Western Armenia. He has served on the local and national executives of the Armenian Youth Federation (AYF) of Canada and Hamazkayin Toronto, and served as the administrator of the Armenian National Committee (ANC) of Toronto. Janbazian also taught Armenian History and Creative Writing at the ARS Armenian Private School of Toronto, and has worked on several translations.