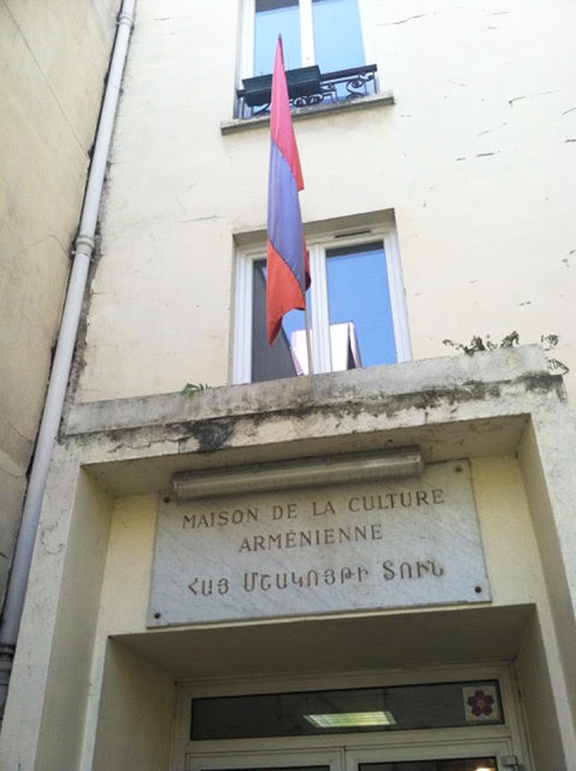 A few years ago, when I was visiting Paris, a friend invited me to have lunch at “Maison de la Culture Arménienne”—a restaurant at an Armenian cultural center.

My friend had given me the proper directions to get there; which metro line to take, where to exit, etc. It was about a mile-long walk from the metro station to the restaurant. Unfamiliar with the area, I thought I would ask people along the way for more specific directions.

As soon as I came out of the metro, I saw a bar. I entered and asked for directions to “Rue Bleue”—Blue Street. There was only one customer, an older guy, and it seemed that he was under the influence of alcohol—he could only mumble. He asked me where I wanted to go. With my broken French, I said, “17 Rue Bleue.”

He asked if I wanted to go to the Armenian restaurant. I said, “Oui.” He said that he liked the food there, and that he goes there often. He pointed in the direction of the restaurant, and I continued my way. Then I came upon a patio cafe. Again, I asked someone sitting at a table for directions. He also knew about the restaurant. “It’s across the post office,” he said.

After a 20-minute walk, I finally found the street and started looking for the post office. At number 17, I saw an old 18th century ornate wooden court-yard gate, but no sign of a restaurant.

At number 17, a group of young men were standing and chatting. Timidly, I asked them if they knew the Armenian restaurant.

As it happened, they were there to have lunch at that restaurant. They said, “We come here often, from work, for lunch.” They directed me to the restaurant, which was in the back building, totally hidden from the street.

I was truly dumbfounded. For some inexplicable reason, I met all these people who knew about this secretly situated Armenian restaurant.

There, I met my friend. I truly loved the restaurant. It seemed to be the best kept secret. Fortunately, I had the presence of mind to take a picture of the young men at the restaurant, to immortalize that memory.

An Armenian woman and her son, from Georgia, formerly of the USSR, managed the restaurant. It was like having lunch at your aunt’s home. The food was a fusion of Mediterranean and Georgian.

The offices of a few Armenian organizations were also located in that building. On the information board, there were a lot of flyers about the activities taking place within the Armenian community in Paris. That was a memorable experience.

Another, perhaps even more interesting, experience took place during the same trip, in the city of Sceaux—a suburb of Paris.

I call this, “the silver lining of two dark clouds.”

In recent years, traveling has shifted from staying in hotels to booking rooms in people’s homes. I’ve been following that trend for quite a while. Through different apps and websites, I’ve sought out local homes to occupy during my trips. All of my experiences staying with locals were good until, one day, a glitch happened. I was staying in a room in Issy-Les-Moulineaux, a suburb of Paris.

Catherine Yesayan with a French policeman

I had extended my stay in that room with the proprietor, but not through the site. So, one day, the host politely asked me to move from his room, because his family wanted to come and stay there. I had to find another room immediately.

I checked the sites and found a room in the city of Sceaux, which my friends had recommended, describing the neighborhood as an excellent area inhabited by wealthy families.

I packed my bags and called a taxi to move to Sceaux. The taxi driver was from hell. First, he couldn’t find the city. After one hour of driving around, he finally found the address. The taxi office had told me it would cost 20 Euro. However, the taximeter showed 50 Euro. I had an argument with him, and he threw all my belongings in the street. In the meantime, I forgot to pick up my red leather overcoat that I had put it in the trunk of the car. I guess he intentionally didn’t give me my jacket.

I realized my coat was missing after he had already left. Walking, and dragging my suitcase, I found my way to the exact address. When my host learned about the incident, she insisted that I should follow up with the taxi company. She helped me call the office, but to no avail. Then, she said that I should go to the police station.

The city of Sceaux has no police station. I had to take a few buses to arrive to another city where I could file a report. In those days, Paris and the suburbs were sizzling under a heat wave. It was with much difficulty that I finally found the police station.

The Armenian Genocide Memorial at the Sceaux Park

With my broken French mixed with English, I explained the reason for my visit. The Police Chief put in a call to the taxi company, but it was no use. I explained to him that I’m an Armenian, a journalist, the whole nine yards.

The officer said that he would give me a piece of information that would make all my troubles worthwhile. And it did.

On April of 2015, that same year, a statue was erected in the memory of the Armenian Genocide in the Park of Sceaux, which was built in the 17th century by a king of France as his summer residence.

The park is enormous—about one-and-a-half square miles. It has many entrances, and, if you don’t know your way out, you may get stuck there. It is massive with many different routes to take. It has stunning gardens, long tree-lined avenues, many ponds as well as old chateaus.

The Police chief told me which bus line to take and where to exit. The memorial was very close to the southern entrance gate. I found it with no difficulty.

The statue is called “The Eagle of Armenia.” It has a very strange configuration: an abstract human shape with a head of an eagle. The work is by French-Armenian sculptor, Toros Rast-Klan (born in 1934 in Aleppo, Syria.) It’s made of bronze and mounted on a pedestal. It was inaugurated in 2015 by the city of Anthony, to honor the centennial of the Armenian Genocide.

After I visited the sculpture, it took me three hours to walk to the other side of the Park and exit from the north gate. I had to take several breaks on the park benches along the way. It felt like I had taken a pilgrimage.

On my way out, I saw many joggers, couples holding one another, cyclists, and people walking their dogs. It was a great opportunity to learn about a hidden gem and a wonderful park. The only drawback was the sweltering weather.

Over the past four years, since my 2015 visit to the park, I wanted to properly articulate my experience. I’m glad that am finally able to share this memory with my readers.