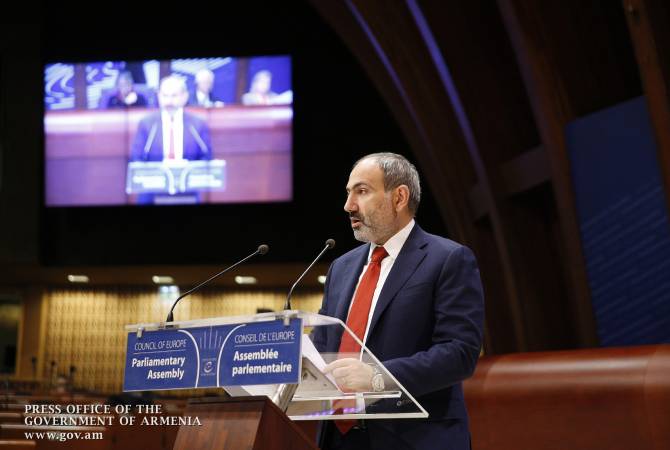 During his remarks at the plenary session of the Parliamentary Assembly of the Council of Europe (PACE), Armenia’s Prime Minister Nikol Pashinian highlighted the importance of the return of Artsakh to the negotiation table for the settlement of the Nagorno Karabakh conflict, reports Armenpress. Pashinian added that the conflict cannot be solved without Artsakh’s participation.

“In our perception, there are several important issues today which we need to answer in order to strengthen the peace agenda in institutional terms, and one of these issues is the full operation of the OSCE Minsk Group Co-Chairmanship format which also supposes the participation of the NK representatives to the peace process because it’s very difficult to understand how we are going to solve the issue without listening and talking to the main side of the conflict. Our actions aim at restoring the dialogue between Azerbaijan and Nagorno Karabakh within the OSCE Minsk Group Co-Chairmanship. A direct meeting has also taken place between the leaders of Nagorno Karabakh and Azerbaijan, there was such practice. Nagorno Karabakh’s elected representatives for a long time have been engaged in the negotiation process, in fact always. Usually it says until 1998, but I can state that the Karabakh representatives were present at the negotiation process until 2018. Before becoming the President of Armenia Robert Kocharian has been the elected president of Nagorno Karabakh, after that Serj Sarksian represented Armenia, but he has also been one of the leaders of Karabakh, and in fact, we have such a situation when Nagorno Karabakh has been represented in the negotiation table during the whole negotiation process. And our task today is to create conditions for this dialogue between Nagorno Karabakh and Azerbaijan not to stop, and this is a very important obligation”, Pashinian said.

He also attached importance to his ongoing dialogues with the Azerbaijani President.

“In the recent period, presenting proposals to our Azerbaijani partners and the society aimed at implementing the peace formula is one of our key actions, and I am happy that I and Azerbaijani President Ilham Aliyev managed to hold quite a direct, sincere and constructive talk. Unfortunately, we still don’t have common views on the mechanisms of the conflict settlement nuances, but the fact that we managed to create an atmosphere for constructive and sincere discussion is already quite good”, the PM said.