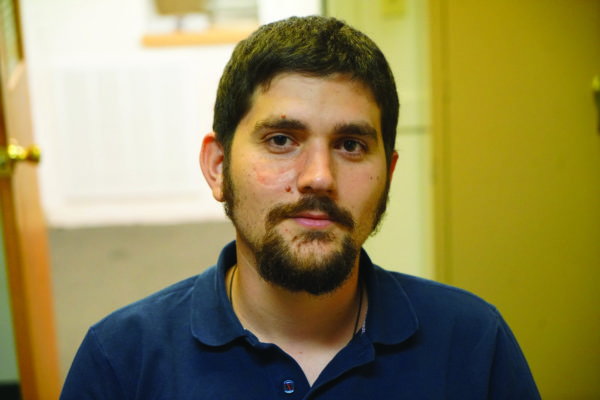 WATERTOWN — Hrag Papazian, a Lebanese-Armenian graduate student in his late 20s, is studying the Armenians of Turkey. He came to the United States recently to give a series of lectures at the Institute of Armenian Studies at the University of Southern California. On his way back across the Atlantic, he stopped by in Boston to give a lecture on the Nor Zartonk movement of Istanbul (see https://mirrorspectator.com/2018/10/11/hrag-papazian-to-speak-at-inaugural-zoravik-event/) and gave an interview on his work.

Papazian graduated from Hamazkayin’s Melankton and Haig Arslanian College (formerly called Hay Jemaran) in Antelias, Lebanon, in 2010 and then attended American University in Beirut, from which he received a bachelor’s degree in communication arts. Deciding to switch his focus to anthropology, he went into a master’s program at the University of Oxford in 2013. He wrote on the Christian Armenians citizens of Turkey living in Istanbul for his thesis, but upon starting the doctoral program at the same university in 2015, decided to broaden his topic to include two other types of Armenians, migrants from the Republic of Armenia to Istanbul who came beginning in the 1990s due to the collapse of the Soviet Union, and Muslim Armenians, who began to come to media attention in the early 2000s.

Papazian moved to Turkey where he did ethnographic field work for 18 months, and then went to Armenia to begin to write his dissertation, which he says he has half completed and plans to finish by the summer of 2019.

In it, Papazian said, he primarily deals with understandings of Armenian identity and Armenianness, including the production, reproduction and interpretation of the latter. He compares how the three groups of Armenians mentioned above who are living now in Istanbul each perceive and define Armenian identity. Papazian said, “It turns out that it is quite different. For the local Christian Armenians, Armenian identity is mostly an ethnoreligious identity. It is very much tied with being a member of the Armenian Church.” Papazian explained that the reasons for this includes the Turkish state’s categorization of Armenians as a religious minority and its oppression or censorship of trans-religious understandings of Armenianness. The state tried as much as possible to encourage the religious aspect and to make Armenians assimilate in other realms so that they no longer are an ethnic or national minority with national ethnic claims. The Treaty of Lausanne, which laid the foundation of the Republic of Turkey, also guarantees religious rights. A concomitant reason for the ethnoreligious identity is the religious discrimination which took place throughout the history of the Turkish republic. It made them conscious of their religious difference. Papazian also pointed to what he calls the experiential pairing of Christian and Armenian. People in that community always experience one in tandem with the other. They learn about Armenianness through the church and religious classes in schools because the history of Armenia and the Armenians itself is banned as a subject to be taught in schools.

As for the Armenian migrants, Papazian finds their main ideological pillars of Armenian identity to be different. It starts with Armenia as a homeland. Consequently, they expect Armenians to show concern, interest and love toward Armenia. If they see these lacking, they would immediately start to question their Armenianness. Papazian related an incident recalled by one migrant who worked for a local Istanbul Armenian. There was a debate about politics and his boss told him “you are a guest here — go back to your country if you do not like this one.” The migrant replied, “how come that country is my homeland and not yours? Are you also not an Armenian? If this is your homeland and not Armenia, then what is the difference between you and the Turks? How can I count you as an Armenian?”

A second important pillar according to Papazian is morality. The migrants speak about moral norms or traditions of Armenianness, particular behaviors that are Armenian and others that are not like Armenians. Kinship and gender are also involved. If one acts in accordance with these traditional moral norms, then one is an ideal Armenian, but if not, they start questioning that person’s Armenianness.

The third group, the Muslim Armenians, said Papazian, lack institutions that the migrant and local Christian Armenians have which somehow dictate, define and reproduce Armenianness. For the local Armenians, that is the church and community system, while for the migrants, the Armenian state. “The only thing the Muslim Armenians have,” Papazian said, “is a lost past, a lost memory. For them, it is very much lineage-based. You are an Armenian if you have Armenian origins. If you learn that your father or grandfather is Armenian, then you are Armenian, period. There is no religious condition, there is no morality or state…It is about learning about one’s Armenian origins and trying to recuperate what was lost in terms of culture and knowledge and content. They mostly learn this from the elders or from discrimination.”

This identity is also connected to the Anatolian, Turkish and Kurdish environment where people live in clans or asirets. Growing up the Muslim Armenians begin to realize that they do not belong to any tribe or clan and eventually realize why — because of their Armenian origins.

Papazian found that with such different understandings and definitions of being Armenian, when these three groups coexist in one city, there are identity conflicts, and a lot of social and symbolic boundaries emerge. Christian Armenians often even reject the expression Muslim Armenian, finding it to be an example of cognitive dissonance — how can one be both a Muslim and an Armenian — because of their religious understanding of Armenianness.

The migrants do not deny the Armenianness of the local Armenians yet do really question it. They see, Papazian said, a lack of enthusiasm toward Armenia, occasional pro-Turkish statements by the local community representatives, and cultural and linguistic Turkification. Many of the migrants as domestic workers see how local Armenian family relationships and gender roles are played. They find it very different than back home in Armenia. Some women told Papazian that the local Armenian men were not real men, as they were not strict enough with their women. In fact, they said, “the wives control the husbands,” which they felt was against Armenian traditions, as was the placing of elderly parents in old age homes.

While analyzing the intra-Armenian boundaries in Istanbul between the three different groups, Papazian argues that it is necessary to always take into account the boundaries between these groups and the Turkish state and the Turkish majority population. For example, the boundary between Christian and Muslim Armenians can be explained through the understanding of Armenianness as well as the symbolic and political relationship of these two groups with the Turks. When the boundary between Christian Armenians and Turks is primarily a religious one, if the Christian Armenians accept Muslim Armenians as Armenians, they would automatically jeopardize their own boundaries with the Turks.

When asked if he would make any comparisons of the Armenians in Turkey with those of various diasporan communities, Papazian replied that he has not done it academically, but could reply informally about the Lebanese Armenians based on personal experience. He said that though the Armenian Church was still important for the latter, their Armenianness was not an ethnoreligious identity because there were ways other than through the church to be Armenian. The transreligious dimensions of Armenianness were not banned, so that political parties and secular schools could exist. You could be an Armenian without having contact with the church in Lebanon, unlike in Turkey.

A short-lived exception to the situation in Istanbul arose in the 1990s with a minority within the Armenian Christian minority that started to challenge the religious understanding of Armenianness. They claimed ethnic rights and the recognition of Armenian history and the contributions of the Armenians to the Ottoman Empire and the Republic of Turkey, and raised their voice against the injustices faced by Armenians. The political climate in Turkey had changed. Various Kurdish organizations had claimed their rights as an ethnic minority, though part of the religious majority. When the Justice and Development Party (AKP) came to power and made some initial steps toward democratization, partly as part of the process to access the European Union, this had its influence on Armenians too. The movement around Agos and Hrant Dink, and the Aras publishing house emerged, demanding rights for Armenians as a national minority.

The youngest generation of Armenians created the Nor Zartonk or New Awakening movement. They saw Hrant Dink as a role model and when he was shot they decided to go public in the Armenian community. They were active as democratic leftist activists in Turkish political circles and began to at the same time involve themselves in Armenian activism. They thought, according to Papazian, that Armenians could not solve their problems by looking inward. Instead they must take part in the general political changes in Turkey. Armenians could have their rights respected only if there was a democratic, non-nationalistic and more diverse Turkey.

Papazian said that they understood that they had to be active in movements like the Gezi Park protests, environmental movements, feminism, LGBT movements, and the defense of workers’ rights in order to represent the Armenian minority in this progressive democratic faction of Turkish society. By this, Papazian said, they also challenged the institutions of the Armenian minority. They advocated a secular representation of minorities such as Armenians in the place of the Armenian Patriarchate, pointing out that there were Armenian atheists and now Muslim Armenians raising their voices.

However, starting in 2015-16, when the AKP put aside democratization and returned to an authoritarian approach, the crackdown on the progressive pro-minorities movements in Turkey had its impact on the extension of these movements in the Armenian community. Some of the Nor Zartonk members left the country like their Kurdish and Turkish counterparts.

For more on Papazian’s analysis of the Nor Zartonk movement, see the video of his recent talk in Cambridge, Mass. for the Zoravik Armenian Activist Collective (https://www.facebook.com/zoravik/videos/314684859307974/?fref=mentions&__xts__[0]=68.ARCqY_al2P_BX_X2HXADaiMPB1GGdPC-Wo9N5KIeKzMIRwe74hJovu9pM-ujQAqIfc3ym_sl-MEhZ4OXSxOEvIJyXRuFDmcMSVDEJ4ZI1T2F1Pc-IfXRdVPHHMmKAm6S-sil8XscUh37jomUL6vagm3EPDeUzImkspLHfE_BXZU1Wu2O4KzzNzb9ipebfOAWHsp80CDs_XY&__tn__=K-R). He also has published the article “Between Gezi Park and Kamp Armen: The Intersectional Activism of Leftist Armenian Youths in Istanbul” (Turkish Studies, vol. 18:1, 2017) and “Armenians and Other Armenians in Turkey” (https://repairfuture.net/index.php/en/identity-standpoint-of-armenian-diaspora/armenians-and-other-armenians-in-turkey, 2017), which covers much of the same topics he discussed in the present interview.