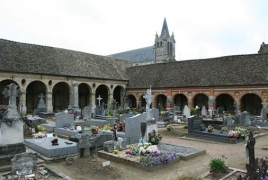 Great French-Armenian singer and songwriter Charles Aznavour will be buried in the commune of Montfort-l’Amaury, not far from Paris, according to his last will. Aznavour died at 94 after a career lasting more than 80 years.

Russian media reports suggest that the singer owned a house in Montfort-l’Amori, where he often spent time with his family.

“My land is French land,” Aznavour said once. “In the XII century monastery in Monfor-l’Amori, a special small family crypt was built.”

The Élysée Palace is also considering the possibility of organizing a ceremony in Yerevan in October to pay tribute Aznavour.

This event can be timed to the summit of the International Organization of La Francophonie in Yerevan on October 11-12.

The performer, born to Armenian immigrants, sold more than 180 million records and featured in over 60 films.

He was best known for his 1974 hit She and was awarded a star on the Hollywood Walk of Fame in 2017.

Fans and admirers worldwide have been holding candlelit vigils all around the globe to mourn the passing of the beloved singer and songwriter.