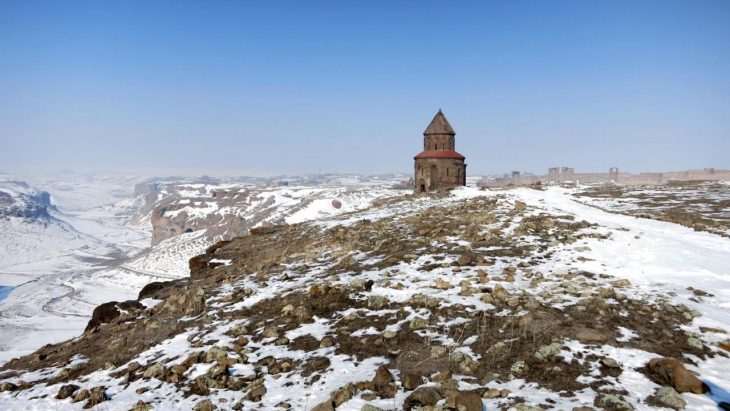 Any time Professor Christina Maranci sees white plaster in an Armenian church in Western Armenia, she considers it a hint that there is something there to work with. The studies of recent years tell Prof. Maranci the plaster hides centuries-old art and history.

Professor of Armenian Art and Architecture at Tufts University, Christina made an accidental discovery in Mren Cathedral a few years ago.

“I was at Mren, hiding from the police who can see everything from the nearby hill, when I started looking carefully at the sanctuary walls. I thought I saw something. I knew that I had a good camera and lens, and that if I uploaded thee photos to my computer I could probably make them bigger. When I got back to the US, I learned that you can use Photoshop to “draw out” the information in the images. You can do similar operations with Word and Powerpoint.

Armenian frescoes are very receptive to these particular tools. I am not a computer scientist, and I don’t know how these things work, but they do work!” says Prof. Maranci.

She has managed to restore the surviving parts of frescoes and inscriptions, invisible now to naked eye, with these tools.

According to Christina, she was not especially interested in frescoes and never thought she would have anything to contribute to their study.  After discovering the 7th century frescoes in Mren, Christina realized she could do the same in other churches.

Thousands of kilometers away, in her home in the U.S., Christina Maranci started studying the photos she made in Mren. The work on the images was meticulous and required a lot of time. In the end, Christina recovered an image of an ox in the apse.

“I knew that it was a vision of God (as in Ezekiel) with ox, lion, man, and angel (the symbols of four Evangelists – Mediamax). This is an apocalyptic scene of the Christ in Glory, and a biblical inscription too, which reads “…մերձեալ է արքայութիւն ա[ստուծո]յ” (Thy Kingdom Come – Mediamax) on the right side of the apse fits nicely with this fresco theme.

These are not so much conclusions as initial hypotheses – much more work needs to be done on the frescoes, much more discoveries, in order to understand the images and their meaning completely. Plus, we need to be confident that the date of the frescoes is in fact the early 11th century. I feel very good about this but I to locate more corroborating evidence,” says Prof. Maranci.

Christina has told that there are many tools for studying images and anyone who can use them can discover hidden images. However, in order to understand those, one needs knowledge of what they are searching.

“If I didn’t know that the ox is traditionally a part of a larger scene of Christ, then I would not know what to look for. The use of the software brings out details, contours, forms, but if you do not know what you are looking for, it is like looking for a needle in a haystack. Same with style – if you understand how the artist paints eyes, ears or a nose, you can use that to look for similar representations in other parts of the fresco, maybe only partially there,” she says.

According to Christina, the frescoes she discovered are extremely sophisticated in their painting style, iconography, and their use of biblical text inscriptions in conjunction with the visual imagery. She is certain there are many more to be found, although the fact they are now in the territory of Turkey complicates her research.

“There were many obstacles when I started. I was perhaps foolish to think that I could apply for a research visa to go to Mren and study there. After three rejections, I realized I had to try another way. I worked with people like Armen Aroyan, who ran for many years heritage tours to Western Armenia. He figured out a way to get to Mren. After that, and when Mren was listed on the World Monuments Fund Watch List, I was able to go several times. I also went to Khtskonk and Horomos, and other sites near the border which are “off limits”. But it is always a game of chance. ,” tells Prof. Maranci.

In addition to the obstacles created by the Turkish government, the research has another issue – lack of experts. Christina is trying to fill that gap, she says, noting proudly she has 100 students in her Armenian art class at Tufts.

Prof. Maranci’s own Armenian roots is what led her to her area of studies: her father was from Sebastia and her mother came from Bayburt and Shabin-Karahissar. “Perhaps, Toramanian was a neighbor!” Christina says.

Currently, she is focused on a book on 10th-11th century Bagratid architecture.

“I want to understand the churches in their deep context – history, society, theology, poetry, everything. I may never finish, but I will be very happy working!” notes Prof. Maranci.