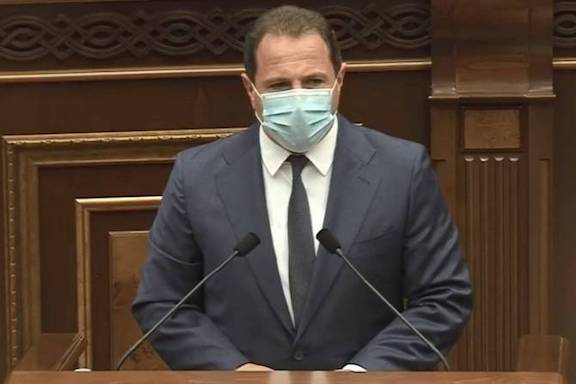 Azerbaijani ceasefire violations directed at Armenia’s Tavush Province on the Armenia-Azerbaijan border are taking place nearly twice as much as before the July attacks in the same area, Armenia’s Defense Minister Davit Tonoyan on Wednesday.

The defense minister was responding to a question by lawmaker Tatevik Hayrapetyan during a briefing in parliament on Wednesday when he was asked about the border situation since Azerbaijan’s attack on civilian and military targets in Armenia in July.

“After the relative suspension of the July actions the enemy’s [ceasefire] violations in the same direction increased nearly twice. We are hopeful that as a result of the appropriate actions of our military the suspension will be preserved and will contribute to the negotiations process,” Tonoyan said, stressing that appropriate countermeasures were being taken by Armenian forces.

He said that the Azerbaijani military units are carrying out reinforcement efforts in an attempt to neutralize the Armenia’s advantage and superiority.

“That’s why they are using various caliber weapons. This situation has been happening for around two weeks now,” said Tonotyan.

‘The OSCE Co-Chairs have been provided with information about all these cases, the Personal Representative of the OSCE Chairperson-in-Office has been notified, and for several times we have cautioned that there is not a single mechanism in place to reduce risks of unnecessary escalation of this situation,” explained Tonoyan.

“Today, unfortunately, we had a fatality,” said the defense minister referring to Junior Sergeant Hovik Tamazyan of the Armenian army who was killed while on duty at a military position in the northeastern part of the Armenia-Azerbaijan state border on Wednesday.

“Appropriate measures are being taken. The Azerbaijani Defense Ministry has expressed concern and has raised the alert level. This was predictable given our appropriate actions,” said Tonoyan.