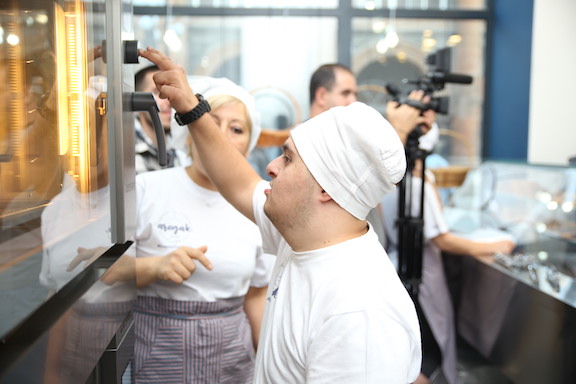 The folks at Aregak Bakery & Café know a thing or two about problem-solving.

In 2018, the café was founded as the solution to a problem: no restaurants in Gyumri would accept a young intern named Mikayel. Without his internship, Mikayel couldn’t graduate from culinary school.

Tigranuhi Hakobyan directs the Emili Aregak Center for special needs kids where Mikayel attended for many years. She remembers the situation clearly.

Mikayel began assisting the center’s cook. Shortly after, Tigranuhi and her team became aware of a European Union grant for social enterprise development.

“When we got the possibility of developing this grant, we were looking at Mikayel through the kitchen windows when he was working,” Tigranuhi says. The young chef’s skills inspired the director and her team with the idea of Aregak Bakery.

After a lot of brainstorming, hard work, and support from many individuals and organizations, Aregak opened in 2018 as the first café in Armenia to intentionally employ people with disabilities.

Besides Mikayel, the team includes six other special needs staff who are showing their skills and abilities to the community. Four mothers of special needs kids are also employed.

Since then, Aregak has become one of the most beloved spots in Gyumri. President Armen Sarkissian is a particular fan, and has visited the staff on multiple occasions. He and Mikayel have a special friendship; they’ve even joked about opening their own café together when the budding chef has honed his culinary skills.

Aregak attracts locals during all months of the year, but the café depends financially on the influx of tourists who begin arriving as the weather warms. Thus, when the coronavirus struck Gyumri in March, Tigranuhi began to worry.

“Just thinking that Aregak Bakery will be closed, even for a few months, made me emotional,” she says. “I was tearing up. I didn’t know what to do.”

Aregak was opened specifically for the purpose of providing life-enhancing employment for vulnerable people. It is the first workplace and only source of earned income that a number of the staff have ever had. But working at Aregak is more than a job — it gives a sense of belonging to people who have rarely felt that deep human emotion outside their homes. To lay off the staff would not only cut their paychecks, but their dignity.

Despite this, Tigranuhi saw no other option but to close the bakery for the first two weeks of the quarantine. At the same time, she was working with her team at Emili Aregak to distribute hygiene items and food to carry the center’s beneficiaries through the difficult time.

On April 1, a few bakery staff returned to the empty cafe to bake reduced quantities of bread for delivery only. At the end of the day, someone bought the leftover loaves and asked that they be sent to several of the Emili Aregak families in need.

Tigranuhi remembers thinking: “Why not start fundraising for the bakery so that we can deliver bread to the community of Gyumri and people can return to work?”

It was a “proactive” and “Aregak-style” solution, she says. The idea aligned with the bakery’s commitment to both supporting vulnerable groups as well as providing employment against all odds.

With the help of a few donors, the bakery mobilized and ramped up its bread production. Armenian Caritas helped the team identify people in need. And some of the baristas and cashiers donned masks and gloves and became the delivery team.

The campaign was announced on Facebook with a photo from the first delivery. The post depicted a recipient of the bread – a elderly woman living in one of Gyumri’s half-ruined buildings, a remnant of the 1988 Spitak Earthquake.

That photo “united a lot of people,” Tigranuhi says.

Lukshmi, an American donor with Armenian friends, says that the picture of the woman “broke my heart.”

“There are just some things you can’t unsee,” she says, “especially when it’s of those particularly vulnerable. When you see this picture, you’re forced to accept that this is someone who truly cannot help herself, someone that without another person’s help, would go hungry.”

Lukshmi, who had to postpone her wedding celebration because of the pandemic, decided to focus on her blessings. She was one of the first donors to the campaign. Then her fiancé and mom joined in. Finally, Lukshmi decided to ask her friends to contribute to Aregak in lieu of sending gifts for her big day.

“For me, staying home is a luxury – I have all of the necessities plus more than I could ever need,” Lukshmi says. “This woman? I can’t imagine the emotional and mental toll staying in her home… I just knew I had to help.”

Other donors were thankful for the opportunity to support a local initiative. “You make me proud to be Armenian,” a woman named Nana wrote in a message sent with her contribution.

With the donations that began coming in, more staff were brought back to work. Aregak’s croissant specialist Kima, mom of an autistic son, quickly learned how to work with bread dough to help the bakery produce the extra loaves being sent out to the community per day.

Kima says she’s “thankful for the opportunity to receive a paycheck during this difficult time” and “especially” thankful to the donors for their role in making that possible.

Julieta, an elderly recipient, showered her thanks on the delivery team. “[The bread] was very delicious,” she told them. “It lasted me a few days.”

Hasmik, who lives alone in a small “temporary” home and suffers from a painful disability, echoed these sentiments. “Thank you to the senders and the bringers,” she said with feeling. “Not one soul has come to my house for a very long time.”

Through the campaign, Aregak Bakery is putting its slogan #ShareOurJoy into action. Although the bread primarily satisfies a physical need, it also brings a ray of hope into the lives of those who need it right now.

While the campaign has been a success, there’s a downside. Many of the staff with disabilities are unable to get involved for various reasons.

Hovhannes, one of Aregak’s sunny and beloved waiters, has Down Syndrome. This makes him more susceptible to the coronavirus. His elderly parents are also high-risk.

Hovhannes’ mom Satik says that her son is struggling with the separation. “Work keeps him busy and motivated,” she says. “He’s feeling depressed when he finds out he still can’t go back to work the next day.”

Hovhannes is also the only breadwinner in the family, and because of that, the family is very thankful for his paycheck.

Aregak manager Diana knows how hard it is for Hovhannes. On Easter, she and the team surprised his family by including them on the bakery’s delivery route.

“They brought cake, bread and pastries. Hovhannes was so happy and surprised,” Satik says. “We are very thankful.”

When the quarantine has passed, Tigranuhi wants to continue this spirit of sharing. It won’t be as large-scale, but the team plans to continue helping families.

“We want to keep this component of Aregak Bakery,” she says. “Aregak means ‘little sun,’ and we want to spread our rays to as many people as possible.”

Based in Gyumri, Sarah Stites is a Birthright Armenia alumna and a communications specialist for Armenian Caritas. She enjoys promoting and writing about the work of organizations connected to faith and human rights.