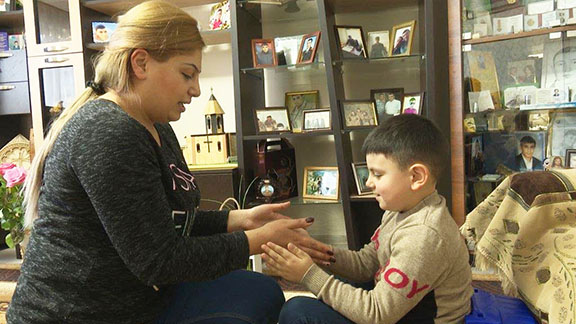 One of the apartments in Gyumri’s Mush district is more like a house-museum. On nearly all the walls of the living room hang photos of Meruzhan Stepanyan, a senior lieutenant killed in an unequal battle against an armed enemy during the days of the April 2016 War. He dreamed of one day making the house into a home. He wanted to rebuild his parent’s apartment – which they received after the Spitak earthquake – with modest solutions and to get married. Meruzhan’s parents, who never speak about Meruzhan in the past tense, have fulfilled their son’s dream.

“We had guests from a number of different places… It was unpleasant to enter a hero’s apartment and see such poor conditions. It pushed us to renovate our apartment. It was my son’s dream to live in a decent home. He would have been the owner of the house; he wanted everything to be good. He had even mentioned it to his fiancée. Sadly, only we were able to make his dream come true,” said Meruzhan’s father, Arthur.

After the earthquake, the Stepanyans lived in a metal container for three years, then moved to the newly-purchased apartment. The family, who has experienced a number of difficulties, had not been able to properly repair their home. Now, more than three decades later, the problem has been solved. Meruzhan’s parents, Arthur and Nune, have tried their best to do as their son would have liked.

The Stepanyans’ grandchildren are already growing up in the newly renovated house. The youngest Stepanyan grandchild, who Meruzhan’s sister named after her dead brother, was born a month after Meruzhan’s death. The newborns presence slowly started to change the family’s life.

“Much has changed since the birth of small Meruzh. The name Meruzh was again heard in the house. Before my grandson was born, when we still didn’t know the name of the baby was going to be Meruzhan, I had a dream. Meruzhan came to me and said, “Mom, don’t worry, I’ll come back. I will definitely come.” Little Meruzh gave us so much strength that we were able to put up a Christmas tree this year. For three years, we have lived through his memories of the New Year. He was the one who decorated the Christmas tree. This year, we assigned the task of decorating the Christmas tree to our grandchildren, Meruzhan and Samvel. They decorated very well, then they took it down. This year, the new apartment seems to have changed a bit. The kids have changed our lives a lot; we are making progress,” said the mother of the hero, Nune.

Viva-MTS and the Fuller Center for Housing Armenia supported the realization of the dream of the hero from Gyumri.

“Such programs are very important because there are many needy people who are not physically or financially able to make their dreams come true,” said Arthur.

A newly renovated room in the Stepanyan house

Viva-MTS (MTS Armenia CJSC) is Armenia’s leading telecommunications operator, having the widest network reach and spreading a wide range of Voice and Data services all across Armenia. Having the best of the Armenian people’s interest at heart since its launch on July 1, 2005, and in a short period of time, Viva-MTS has managed to build a nationwide network and a considerable customer base. Viva-MTS drives innovation and aims at always being at the forefront of any development serving the Armenian mobile communications market. The company follows the guidance provided by ISO 26000 (International Standard of Social Responsibility) and ISO/IEC 27001:2013 (Information Security Management System). For more information, visit the website.

Mobile TeleSystems PJSC (“MTS”) is the leading telecommunications group in Russia and the CIS, offering mobile and fixed voice, broadband, pay-TV as well as content and entertainment services in one of the world’s fastest-growing regions. Including its subsidiaries, the Group services over 86.8 million mobile subscribers in Russia, Armenia and Belarus. Since June Y2000, MTS’ Level 3 ADRs have been listed on the New York Stock Exchange (ticker symbol MBT). Additional information about the MTS Group can be found online.

Fuller Center for Housing Armenia is a non-governmental, charitable organization that supports community development in the Republics of Armenia and Artsakh by assisting in building and renovating simple, decent and affordable homes, as well as advocating the right to a decent shelter as a matter of conscience and action. FCHA provides long-term, interest-free loans to low-income families. The monthly repayments flow into a Revolving Fund, which is used to help more families, thereby providing a financial foundation for sustainable development. Since 2008 the Fuller Center for Housing Armenia has assisted over 800 families. For more information, please visit the website or email us at fcarmenia@fcharmenia.org.