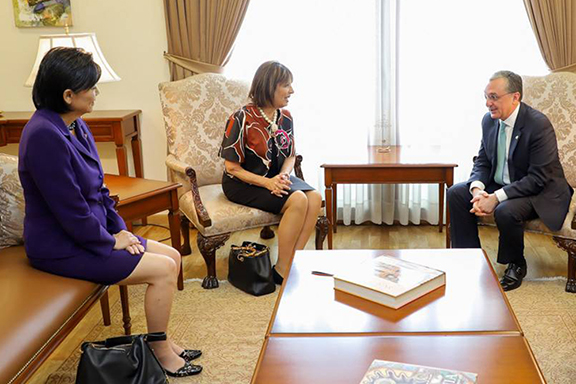 “These visits by Reps. Speier and Chu are all the more meaningful – for all Armenians, from their home Congressional Districts to the farthest reaches of our Armenian homeland – in light of their recent legislative leadership in securing the adoption of House amendments supporting Armenia’s democracy and strengthening Artsakh’s security,” said ANCA Executive Director Aram Hamparian. “We look forward to their successful visits, and of course, to continuing to engage here in Washington, DC with House and Senate leaders to ensure that these provisions remain in the final bills signed into law by the President.”

Rep. Speier, with the support of Reps. Frank Pallone (D-NJ) and Adam Schiff (D-CA), introduced the Speier amendment to the House version of the Fiscal Year 2020 Foreign Aid Bill, appropriating $40 million in democracy aid to Armenia. “It is very important at this point in time that we do everything in our power to support this new democracy,” stated Rep. Speier during House floor debate in June. “Armenia has a rare and potentially fleeting window of opportunity to consolidate and build upon its democratic gains. […] Armenia has earned a clear signal that the United States supports its democratic transformation and resources will be brought to them to carry out that transformation.”

Thousands of ANCA Rapid Responders and Armenian Americans across the U.S. reached out to their U.S. Representatives in support of the Speier Amendment for Armenia assistance through the ANCA’s March to Justice portal. In the days leading up to the vote, ANCA Leo Sarkisian Summer Interns amplified the nationwide constituent advocacy, visiting with every U.S. House office in support of the measure, which was adopted by a vote of 268 to 153 in June.

Mirzoyan added that the United States is among the key partners for Armenia, and Armenia is eager to develop U.S.-Armenia relations in all directions. Mirzoyan emphasized the importance of cooperation between the legislatures of the two countries.

The parliament speaker said that after the 2018 “Velvet Revolution,” Armenia was confidently moving in the direction of democratic reforms and free elections with human rights, free competitive economy, transparency, accountability, independent judicial system and fight against corruption as fundamental goals for the new government of Armenia.

Mnastakanyan emphasized the need for ongoing U.S.-Armenia dialogue at all levels, and thanked the visiting lawmakers for their efforts to strengthen U.S.-Armenia relations.

In a meeting with Supreme Judicial Council President Ruben Vardazaryan, and Council members Grigor Bekmezyan, Sergei Chichoyan and Hayk Hovhannisyan, the Members of Congress received an update on judicial reforms in Armenia.

The council members briefed the visiting U.S. lawmakers about the steps being taken to ensure the efficiency and reasonable timeframes for investigation of cases. Vardazaryan said that three times more qualified judges were needed to make the judiciary more effective stated that in order to make all judicial matters effective, explaining that there were 13 vacant positions on various benches across the country.

Speier and Chu said that they would follow the developments of the Supreme Judicial Council in Armenia in hopes of providing assistance and solutions to the ongoing process.

Chu and Speier are scheduled to travel to the Republic of Artsakh (Nagorno Karabakh), where they will be meeting with government leaders and visiting the U.S. funded de-mining program, led by The HALO Trust. Central to the day’s discussions will be the Chu Amendment to the Fiscal Year 2020 National Defense Authorization Bill, led by Congresswoman Chu with the support of Congressional Armenian Caucus Frank Pallone (D-NJ) and Vice-Chair Adam Schiff (D-CA).

“The campaign of terror against the people of Artsakh must end,” Rep. Chu told the ANCA following House passage of her measure in July. “That’s why I introduced my amendment to support the cease-fire strengthening proposals originally put forward by House Foreign Affairs Chairman Eliot Engel and his predecessor, Ed Royce. The Royce-Engel proposals include gunfire locators, new observers, and a ban on snipers, heavy arms, and new weaponry along the line-of-contact. Adopting them is necessary for ensuring those who violate the peace are caught and stopped, and that is what my amendment encourages. I am pleased it was adopted in the NDAA and hope to see these proposals implemented,” concluded Rep. Chu.

ANCA summer interns worked across Capitol Hill advocating in support of passage of the Chu amendment throughout the days leading up to the July 11th House adoption of the measure. Since her first election to the U.S. House a decade ago, Congresswoman Judy Chu (D-CA) has enjoyed a strong relationship with the ANCA chapters in Pasadena and the San Gabriel Valley.

The Royce-Engel initiative, first proposed in Fall of 2015, received the support of over 100 U.S. House members through a series of Congressional calls to the U.S. Administration and the OSCE to take concrete action to ensure Artsakh peace as Organization for Security and Cooperation in Europe (OSCE) Minsk Group mediated negotiations continue. The ANCA has launched multiple nationwide grassroots campaigns in support of the initiative, which has gotten support from the U.S. State Department and the OSCE Minsk Group Co-Chairs, in addition to the Republics of Artsakh and Armenia. Azerbaijan remains the only obstacle to their practical implementation.