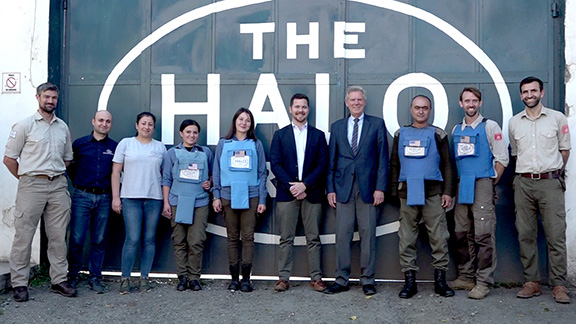 “The State Department believes, mistakenly, that the [Halo Trust de-mining] program is no longer needed, in other words, that most of the de-mining has already occurred,” Rep. Pallone told reporters following his visit. “What we learned today from The HALO Trust people is that’s not the case. There is still more work to be done. So, we are going to go back to the U.S. and stress to the State Department, when we meet with them, that there’s still more work to do.”

Congressman Pallone and Congressional staff member James Johnson sat down with The HALO Trust to review the progress of the program and the need for continued U.S. support to complete the de-mining efforts. In August, when reports emerged that the State Department was looking to prematurely cut off funding for Artsakh de-mining, the ANCA worked with The HALO Trust and Congressional leaders in securing the support of over 100 U.S. Senators and Representatives to continue U.S. aid for this vital humanitarian program.

In June, the U.S. House adopted an amendment to the FY20 foreign aid bill, spearheaded by Rep. TJ Cox (D-CA) and supported by Representatives Pallone, Jackie Speier (D-CA) and Adam Schiff (D-CA), calling for continued U.S. assistance for de-mining and rehabilitation services in Artsakh. The ANCA is currently working with Senate leaders to include similar language in their version of the bill, which is set to reach the Senate floor in the next few weeks.

In addition to The HALO Trust, Rep. Pallone’s delegation also visited the Lady Cox Rehabilitation Center and met with its Director Vardan Tadevosyan, and his dedicated staff, who provide high-quality, specialized medical care each year to approximately 1,000 local and regional patients. Among those receiving treatment include patients – from Artsakh, Armenia, Russia, and Georgia – with spinal cord injuries, elderly stroke victims, and infants and children born with disabilities, such as cerebral palsy and spinal bifida. The ANCA continues to advocate for expanding U.S. assistance to Artsakh to support the life-changing efforts of this center.

Rep. Pallone also met with a 50-member delegation of Adventist Health Glendale, who had arrived in Artsakh days ago on their second medical mission to the Republic, where they plan a broad range of surgeries, carried out jointly with specialists of Stepanakert’s Republican Medical Center.

“Congressman Pallone, always at the forefront of advancing U.S.-Artsakh relations, is living out his legislative priorities – traveling to Artsakh, breaking down barriers to bilateral ties, challenging Azerbaijani aggression, and securing funding for de-mining and other pressing humanitarian needs,” said ANCA Executive Director Aram Hamparian. “His visit, and those that will follow, underscore the urgency of passing H.Res.190 – which would not only facilitate much needed direct dialogue but also help create the conditions for peace by calling for Artsakh’s long overdue return to the OSCE talks.”

Congressman Pallone answers questions by reporters from Artsakh Press, Aparaj and other local and Armenia news agencies in Stepanakert.

Congressman Pallone told reporters that his purpose in traveling to Artsakh is three-fold:

“The U.S. needs to be more involved in Artsakh and to not have these advisories sent to the American people saying don’t come here, don’t communicate with anyone here,” Rep. Pallone told reporters.

After two days in Artsakh, Rep. Pallone returned to Armenia, where he will take part in a trip planned as part of an ongoing Parliamentary exchange program between the U.S. and Armenia.

Representatives Speier and Judy Chu (D-CA) are scheduled to visit Artsakh over the next several days.