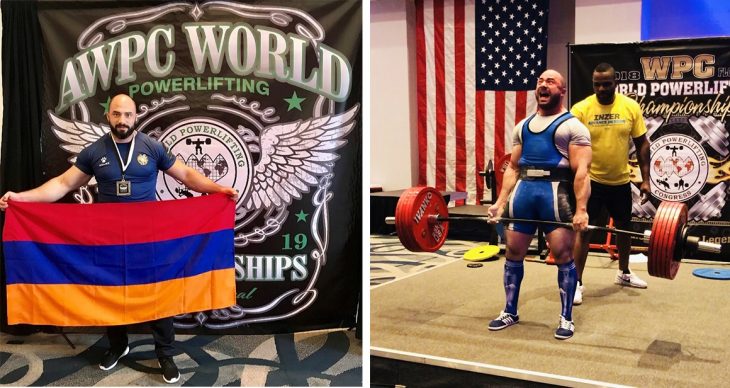 “Asbarez”,-Vachagan Baghdagyulian, a professional master trainer Gold’s Gym in Armenia, won first place in his weight category at the AWPC World Powerlifting Championship in Orlando, Fla. The World Powerlifting Congress consists of 46 countries worldwide that participate in the annual championships. This year, the event was held from August 15 to 17.

Baghdagyulian received the highest scores and becoming a 2019 World Champion of AWPC. His competition results were as follows:

Baghdagyulian was born on February 23, 1988 in Armenia, the city of Yerevan. He studied at a comprehensive school, Belinsky, from the 1995 to 2005. At the age of 10, Vachagan began playing professional soccer. He played for well-known teams in Armenia, in local team leagues, as well as major leagues.

In 2009, Vachagan graduated from the Armenian State Institute of Physical Culture with a bachelor’s degree in Sports Coaching. At the University, he began to engage in arm wrestling. During a competition between athletes of different professional institutes of the country, he was able to take the first place.

After graduating from university, he served in the army from 2009 to 2011. Continuing his arm wrestling competitions while in the army, he became a two-time champion.

Vachagan became an arm wrestling medalist in the national championship.

Upon returning from the army, he worked at Armenia’s Gold’s Gym, as a fitness trainer, from 2011 to 2013. In 2013, he received became certified as an international fitness trainer.

Between 2013 and 2017, he worked at the Mega Sport fitness center in St. Petersburg Russia.

After leaving his position at Mega Sport, Vachagan began working at Armenia’s Gold’s Gym as a Pro Master Trainer.