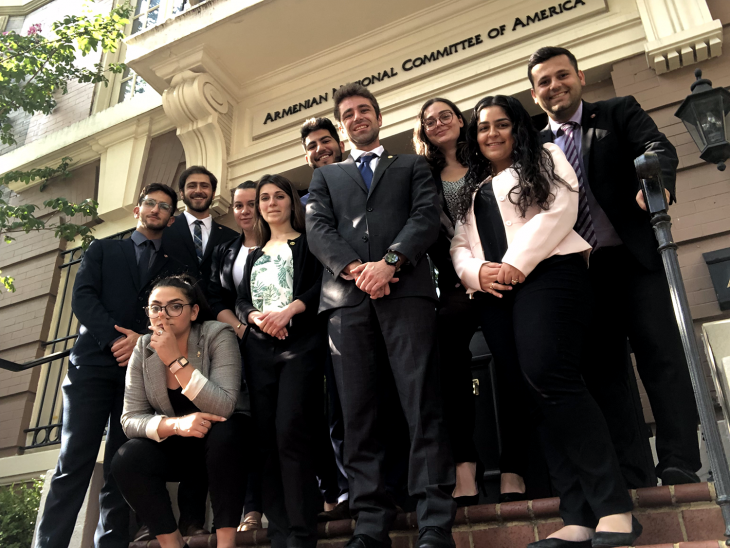 I came to DC in search of a lesson on the organizational aspect of advocacy. Like any “engaged” Armenian, I was familiar with the effective work of the ANCA headquarters in DC and hoped for the opportunity to see what they did differently. In a sense, I was in search of some special insight into the magic being worked at 1711 N St NW. Eight weeks later, I have come to realize that there is no magic; that the meat and potatoes to the Hai Tahd equation in DC is no different from our community’s successes worldwide. Everything is—and always will be—contingent upon principled action, total accountability and committed advocacy.

This point may appear self-evident: after all, many people talk freely about “devotion” or “commitment” to a cause. However, talking about dedication and actually dedicating oneself to every aspect of a given task remain entirely separate matters. In this sense, the Leo Sarkisian Internship has also doubled as a graduate course on organizational commitment—taught by staff members who have shown us what such work might look like, in lieu of simply telling us.

The job is the job, and compromising on any one aspect threatens the structure upon which our larger aspirations rest.

To illustrate this point, allow me to share some observations. Consider Harout Margossian: a life-long advocate who has given more to the Armenian community than most ever could. Today, even in his professional retirement and no-doubt deserving of a “break,” Mr. Margossian’s efforts remain steadfast. Indeed, he continues to serve the ANCA and goes about his work—including tasks that others might consider mundane—with the same seriousness and passion with which he has always served the community. Others have no hesitation working past midnight to focus on the latest Artsakh initiative, before returning to work a few hours later with the same enthusiasm. These examples, which hold true for everyone at the office, provide a salient lesson: when it comes to advocacy, there is no such thing as “small” or “big” tasks. The job is the job, and compromising on any one aspect threatens the structure upon which our larger aspirations rest.

This situation owes to Armenia’s geopolitical realities—particularly due to our relative lack of regional assets. For decades, such material disparities have proven limiting when it comes to our influence at the negotiating table. And while the “paper ladle” to which Armenians have been limited has gained strength since Khrimian Hayrig extended his famous analogy, we are still building the geopolitical teeth to truly dictate nation-building on our own terms. Consequently, the success of our national prospects often relies on an equalizer of sorts: an unmatched wealth we possess to favorably tip the balance. Or, to echo ANCA chairman emeritus Garo Armenian, “leverage.”

Our leverage is grassroots advocacy. As Armenians worldwide coalesce around pressing matters, our ability to dictate nation-building grows more fruitful. But the flip side is also true: our influence diminishes where we zig-zag around issues that ought to be non-negotiable. Even where we portray unity on such issues, weaknesses still arise when we seek substitutes for hard work and committed advocacy. This adds an urgency to the Armenian identity—an existential choice, if you will, compelling everyone who so-identifies to play their part in giving Armenian policymakers the tools they need to secure our interests. Fortunately, there is a silver lining: the strength of a diaspora spread throughout dozens of countries, coupled with the dedication of our co-ethnics in Armenia and Artsakh, provide a wealth of unique angles to better serve Hai Tahd.

Still, actualizing this potential requires honesty. It is contingent upon understanding our respective strengths and limitations—what we are, and what we are not.  For instance, while we may feel a “call to action” upon hearing of 19-year-old Armenians who are killed weekly on the front lines of Artsakh, most of us are not soldiers. We may read and hear stories of the uncompromising advocates who propelled the issue of Hai Tahd to prominence during generations past, but we ourselves are not yet so polished. We are, however, uniquely situated as citizens of the United States—empowered by unique opportunities and growing up as a generation that worries not with the struggle of establishing an independent homeland.

To this end, we have prior generations to thank—generations which, through their resilience and principled advocacy throughout decades of Soviet Rule, proved that it was not simply nationalistic romanticism to believe that an independent Armenia would once again exist; that there is a difference between having ideals and being ideologues. We stand to gain something by keeping this perspective in mind. The fear of standing for something nonsensical, especially when your aspirations amount to little more than basic justice for some of the darkest stains on the moral fabric of humanity.

Amidst this backdrop, members of the Diaspora can choose from a multitude of avenues for advancing Hai Tahd. Leo Sarkisian interns do so by joining an organization and a community which has continually played a front-line role in pursuing these issues—by creating leverage. Indeed, as Artsakh’s Representative to the United States Robert Avetisyan aptly noted, “you have to create your own luck.” The ANCA certainly has.