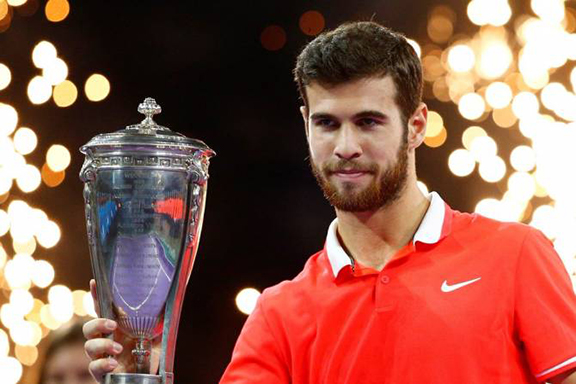 Armenian Karen Khachanov, a rising star in the world of Tennis from Russia, defeated incoming world champion Novak Djokovic to win his first Masters 1000 title at the Paris Masters, reported the BBC.

Fourteen-time Grand Slam champion Djokovic, 31, was to have still taken over Rafael Nadal at the top of the world rankings on Monday.

“It means the world to me,” said world number 18 Khachanov.

“It’s one of the biggest titles in my career so far. I couldn’t be happier to end the season like this, to win against Novak Djokovic, the number one in the world.”

Khachanov will rise to world number 11 on Monday and becomes the first Russian since Nikolay Davydenko in 2009 to win a Masters 1000 title.

Djokovic, who has been suffering from flu-like symptoms all week, added: “I don’t feel too good today but I’d like to give respect to Karen for playing a great match today and he deserves to win.

“He deserves his trophy and I am sure we will see a lot of great matches from him in the future.”