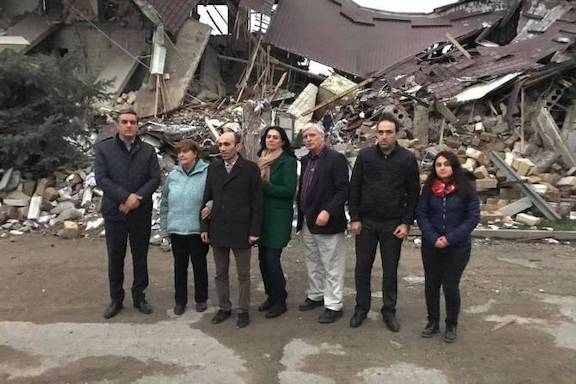 Caroline Cox, a member of the British House of Lords and a staunch human rights advocate, visited Artsakh on Friday to get a first hand account of the destruction and havoc caused by Azerbaijan during the 45-day war. She is the first foreign official to visit Artsakh since the signing of an agreement on Monday that ended the war, but saw the surrender of territory to Azerbaijan, including Shushi.

Baroness Cox, who has been an outspoken advocate for Artsakh since 1990 and who witnessed the carnage caused by Azerbaijan during the Maragha Massacres, had also established a namesake rehabilitation center in Stepanakert for injured soldiers and people with disabilities.

She reiterated her support for the just struggle of the people of Artsakh—for their rights and freedoms—adding that “the international community is obliged to pay duly attention to the existing needs and problems.”

Beglaryan briefed Cox on the war crimes committed by Azerbaijani forces during the war from September 27 to November 9 and presented the results of the fact finding missions conducted during the Azerbaijani aggression.

The recorded facts were more than sufficient for international human rights organizations and generally the international community to take action to properly condemn and prevent the Azeri crimes, said Beglaryan.

Answering the questions of the delegation, Beglaryan touched upon the humanitarian disaster in Artsakh and outlined the imperative for international assistance by human rights organization, which he said are important for overcoming the crisis.