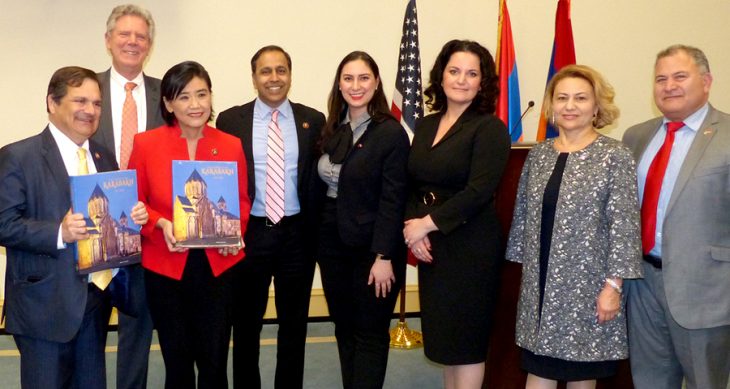 “I stand with you and the people of Artsakh and their rejection of the repeated attempts by the Azerbaijani government to bring them back under oppressive rule,” said Congressional Armenian Caucus Co-Chair Gus Bilirakis (R-FL). “They fought for their freedom, their right for self-determination, and the opportunity to be greater than second-class citizens. I’m glad to be here today as we recognize the 30th Anniversary of the Baku pogroms, and stand in solidarity with the people of the Republic of Artsakh.”

“The U.S. stands on the side of democracy and peace – and that means standing with the Armenian people,” said Rep. Judy Chu (D-CA), who characterized the anti-Armenian attacks in Baku, Sumgait, and Kirovabad “a direct assault on the right to self-determination of Artsakh – and it is an assault that is continuing to this day.”  Rep. Chu, who traveled to Artsakh in 2019, successfully led an amendment to the FY2020 National Defense Authorization Act urging the implementation of common-sense Royce-Engel proposals, calling for the removal of snipers, deployment of additional OSCE monitors, and placement of gun-fire locators to facilitate Artsakh peace negotiations.  Armenia and Artsakh support the proposals, while Azerbaijan continues to oppose them. 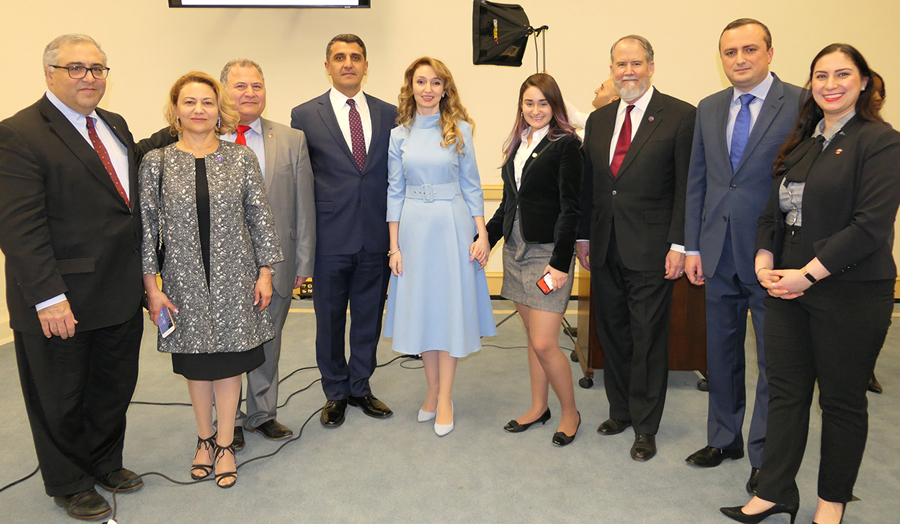 Congressional Armenian Caucus founding Co-Chair Frank Pallone (D-NJ), who is the most traveled Congressional leader to Artsakh, noted that he first met survivors of the Baku attacks in the early 1990’s during a visit to Armenia.  He noted that pogroms such as these have roots in times even before the Armenian Genocide and the importance of vigilance to ensure they never happen again.  Rep. Pallone then cited ongoing efforts to support Artsakh, including the appropriation of U.S. funds for de-mining efforts and maintaining military aid parity between Armenia and Azerbaijan.

“This fight is not just for Armenian people, but for all oppressed people all over the world, regardless of who you are because if we don’t speak up here, who will,” said Rep. Raja Krishnamoorthi (D-IL), who called for perseverance in the fight to secure a durable and democratic resolution to the Artsakh conflict.  Earlier in the day, in a Congressional statement commemorating the Baku pogroms, Rep. Krishnamoorthi called on the Azerbaijani government to “acknowledge that these atrocities occurred and that it seeks justice for the victims by prosecuting those who committed these horrific acts of violence.”

“The Armenian people continue to make sacrifices for the right to self-determination,” stated Rep. Jim Costa (D-CA) who noted that, in the case of Artsakh, “we must never let up so that human rights be recognized.” Rep. Costa pledged to visit Artsakh later in the year, coinciding with the 7th annual Fresno-Armenia medical mission.

“You are doing a service to human rights in this world by calling attention to the pogroms in Baku,” said Rep. Andy Levin (D-MI), who, as a member of the House Foreign Affairs Committee, pledged ongoing support for Artsakh de-mining and other activities.

Rep. Jackie Speier (D-CA), who traveled to Armenia and Artsakh with Rep. Chu last fall, noted that “we have to do our level best to continue funding for de-mining in Artsakh,” expressing disappointment that the U.S. Ambassador to Armenia expressed reluctance to fund the project.  In remarks on the U.S. House floor earlier in the week, Rep. Speier noted that “even though Armenia and Artsakh have embraced the Royce-Engel peace proposal, while Azerbaijan has rejected it, Artsakh could lose the mining assistance. And today, even though Armenia has transformed itself into a growing democracy, it is autocratic Azerbaijan that has received a massive, disproportion increase in military aid from the United States.  If the administration won’t help those who stand for peace and democracy, Congress must. The legacy of Baku, Sumgait, and Kirovabad reminds me why.”

Rep. TJ Cox (D-CA), who led an amendment to secure continued U.S. aid to Artsakh in 2019, noted that “Armenians in Baku were killed, tortured, robbed, and tens of thousands were forced to flee their homes to escape persecution, causing families to be uprooted and torn apart. […] The Aliyev government continues holding a militant policy against Armenians, especially within Artsakh. That’s why now, more than ever, it is critical for us to strengthen our ties to Artsakh and hold Azerbaijan accountable for its actions,” concluded Rep. Cox.

“We must ensure that the victims of the Sumgait and Baku pogroms are never forgotten and that such hateful acts of violence never happen again. We must remain committed to achieving a lasting peace in the Caucasus, and ensure that the people of Artsakh are able to live free from Azerbaijani abuse and aggression,” said Rep. Jan Schakowsky (D-IL), referencing her statement submitted to the Congressional record earlier in the week.

Members of Congress in attendance received copies of “The Chronicles of Karabakh”, a magnificent picture book detailing the history of the Artsakh, generously donated by Ashot and Ayida Petrosyan, survivors of the Baku pogroms who had traveled to Washington, DC to participate in the solemn commemoration.

Astvatsaturian Turcotte:  “Just as with anti-Semitism, rooting out the hatred toward Armenians cannot be done by brushing aside this history.”

The event featured moving keynote remarks by Anna Astvatsaturian Turcotte, who, along with her family, fled the anti-Armenian attacks in Azerbaijan’s capital, Baku, in the fall of 1989, finding safe haven in the US in 1992.  An accomplished lawyer, author, and human rights advocate, Astvatsaturian Turcotte, explained, “the same anti-Armenianism that made my grandfather an orphan and that made me a refugee is alive and well today.  Just as with anti-Semitism, rooting out the hatred toward Armenians cannot be done by brushing aside this history.  The avoidance of calling things as they are contributes to the anti-Armenianism at the highest level of Azerbaijan’s government. These crimes continue with shooting across the Artsakh and Armenian borders at civilians.”

Astvatsaturian Turcotte stressed, “This is the same autocratic Azerbaijan that pardoned and made a hero of a convicted ax-murderers of a sleeping Armenian soldier during a NATO Partnership for Peace Program in Hungary. […] This is the same Azerbaijan that commits war crimes on civilians living in Armenia during the April, 2016 war […] And the story continues.  And that’s because back then in the 1980s there was no justice for the ones that died, no justice for the property we lost.”

ANCA’s Yerimyan Shares a Mother’s Solemn Oath:  “Artsakh Must Be Safe – And To Be Safe, It Must Be Free”

ANCA Government Affairs Director Tereza Yerimyan, who introduced Astvatsaturian Turcotte at the event and served as one of two emcees for the evening, shared the poignant story of Baku survivor Rosa Akopova, who was forced to watch as her daughter was raped and killed during the attacks 30 years ago.  “While working for the ANCA in Los Angeles, she [Ms. Akopova] called me to her home to tell her story – not for pity, though she surely deserved our sympathy,” explained Yerimyan.  “No – she shared her story so that others would not share her fate.  ‘Artsakh,’ she said, ‘must be safe, and to be safe, it must be free — free from foreign rule, free from aggression, free of land mines, free to live in peace.’”

The ANCA has launched a nationwide grassroots campaign calling for a $10 million allocation for U.S. aid to Artsakh in the Fiscal Year 2021 Foreign Aid Bill, to support ongoing de-mining efforts by The HALO Trust and rehabilitation services like those offered by the Lady Cox Rehabilitation Center, in Stepanakert.

During the course of the commemorative evening, Artsakh Representative to the U.S., Robert Avetisyan, who pledged that Artsakh would continue to grow strong enough to ensure that peace. “We are grateful the United States for its support in the effort to establish peace in the region through efforts like the Royce-Engel initiatives and humanitarian de-mining,” said Avetisyan.

Armenian Ambassador to the U.S. Varuzhan Nersesian noted that the Baku Pogrom were the latest in a series of anti-Armenian attacks dating back to 1905 and 1918, and that it took place in the broader context of the Nagorno Karabakh conflict – a brutal and violent Azerbaijani response to the peaceful and democratic Artsakh movement.

The Capitol Hill program was organized by the ANCA, Armenian Assembly of America, Embassy of Armenia, and the Office of the Nagorno Karabakh Republic in cooperation with the Congressional Caucus on Armenian Issues.

Photos from the commemoration and Capitol Hill meetings are available on the ANCA Facebook page.  Additional video will be shared in the upcoming days.