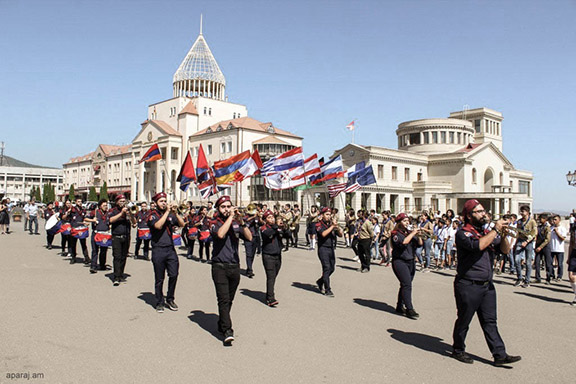 After months of planning, Homenetmen inaugurated a new chapter in Artsakh during a ceremony on Wednesday in Stepanakert’s Revival Square. The Artsakh chapter is the Homenetmen’s 111th chapter worldwide.

Scouts—boys, girls, cubs and brownies—in their uniforms joined the Homenetmen Artsakh marching band for a parade on Revival Square as locals welcomed the newest Homenetmen chapter.

President Sahagian welcomed the establishment of the Homenetmen in Artsakh and praised the praised the 101-year-old athletic and scouting organization for its work in educating and empowering generations of young Armenians throughout the world.

He expressed hope that the Homenetmen will be able to elevate the physical and patriotic development of the youth of Artsakh, saying that he had high hopes for the Homenetmen to advance and succeed in Artsakh.