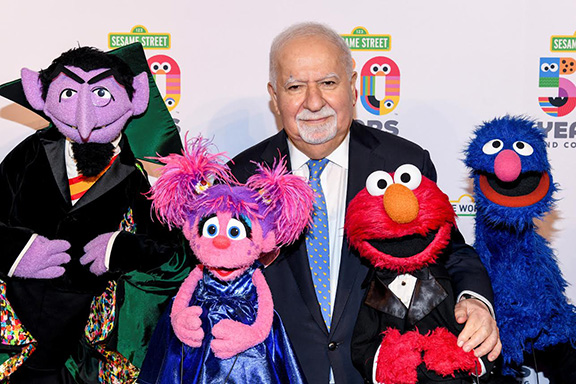 “For half a century, Sesame Workshop has been on a continuous, relentless, and successful mission to help kids get ready for school—and for life,” said Jeffrey D. Dunn, President and CEO of Sesame Workshop. “As we mark this historic anniversary, we’re proud to honor Former First Lady Michelle Obama, a tireless champion of children and families who shares our commitment to improving the lives of kids around the world.”

Sesame Street co-founder Joan Ganz Cooney joined Lin-Manuel Miranda to present Obama with the award. “When I became First Lady, and I knew that I wanted to help kids reach their potential, my first question was a simple but familiar one: Can you tell me how to get to Sesame Street?” said Obama. “I cannot tell you how proud and thankful I am to come here tonight as a Sesame Street partner. You are always ahead of the curve, always out there observing, and learning, and creating new ways to help kids and parents navigate the world around them.”

You can watch the former First Lady’s speech here.

Held at Cipriani Wall Street in New York City, the event was hosted by Hoda Kotb and included special guests John Oliver and Chrissy Teigen. The evening culminated with performances from John Legend and the Sesame Street Muppets, finishing with the Sesame Street classic, “Sing.”

The event also honored the Ford Foundation and the Carnegie Corporation of New York, which were among the first funders of Sesame Street in the 1960s. Original cast member Sonia Manzano presented Visionary Awards to Carnegie Corporation president Vartan Gregorian and Ford Foundation president Darren Walker, who accepted on behalf of their organizations. Remarks from Julia Stasch, president of the John D. and Catherine T. MacArthur Foundation, highlighted their historic $100 million award to help Sesame Workshop and the International Rescue Committee bring early childhood education to children affected by refugee crises. On behalf of the LEGO Foundation, CEO John Goodwin accepted the Innovation Award for their commitment to support displaced children through the power of playful learning.

“In 1969, the audacious philanthropy of the Carnegie Corporation and Ford Foundation made the creation of Sesame Street possible, helping to improve the lives of millions of less-advantaged children around the world,” said Sherrie Westin, Sesame Workshop’s President of Social Impact and Philanthropy. “Fifty years later, we’re thrilled that similarly bold commitments from the MacArthur Foundation and the LEGO Foundation are helping us give millions of displaced children the tools they need to thrive.”

Last night’s benefit raised over $4.5 million, which will help Sesame Workshop deliver on its mission to help kids everywhere grow smarter, stronger, and kinder. Today, the organization reaches children and families in more than 150 countries, including areas where children have no other access to quality early education. All of Sesame Workshop’s social impact work—from providing early learning to millions of children affected by the Syrian and Rohingya refugee crises to addressing tough topics like homelessness and foster care in the United States—is made possible with the generous support of like-minded partners including government, foundations, corporations, and individuals, as well as proceeds from the annual benefit.