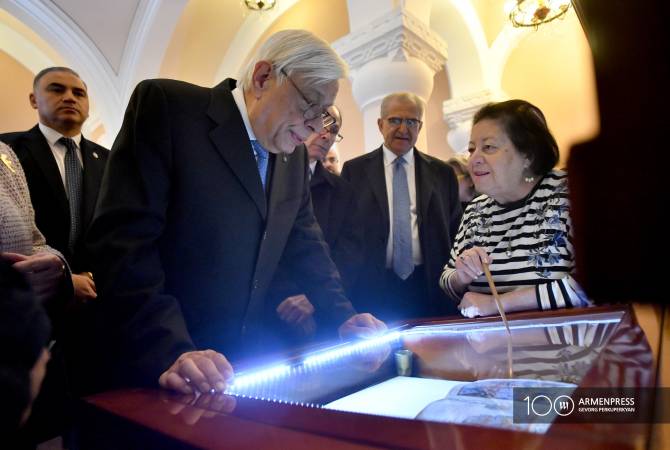 On the second day of their official visit to Armenia, President of Greece Prokopis Pavlopoulos and First Lady Vlasia Pavlopoulo visited Yerevan’s Matenadaran , the Mesrop Mashtots Institute of Ancient Manuscripts.

Matenadaran Director Vahan Ter-Ghevondyan welcomed the guests. President Pavlopoulos toured the institute and then shared his impressions with reporters.

He said Matenadaran is a very valuable museum.

“It represents not only Armenian, but human culture. We see the path of Armenian language, Armenian scripts, how impressive it is. What we saw here is a big contribution in universal human culture. The Armenian language, Armenian writers contributed to Greek literature being translated. This museum is of great importance. In this sense I think Matenadaran is a center of mankind’s culture. I was touched by the big manuscript which your ancestors saved from destruction during the genocide. They did everything to save the manuscripts from those atrocities,” he said, referring to the Armenian Genocide. “This shows the Armenian people’s power”, he said.