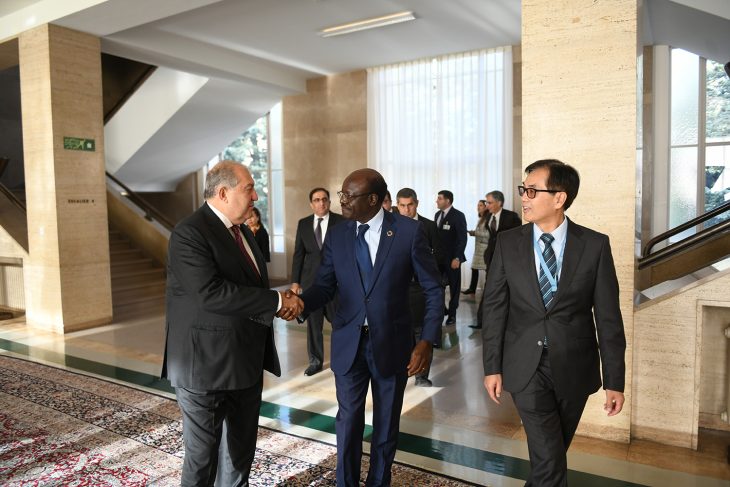 Today the President participated in the panel’s discussions at UN Headquarters in Geneva today.

The group advises the Secretary-General of the United Nations Conference on Trade and Development on current key and urgent economic development challenges, generates ideas for international initiatives to overcome them.

Participants of the group, heads of state and government, reputable economists and experts, are invited personally by the UNCTAD Secretary General. Group meetings are held in a closed format, in line with Chatham House rules.

The keynote discussion on “Key Challenges and Opportunities” President Sarkissin participated in was moderated by UNCTAD Secretary-General Mukhisa Kituyi.

Following the discussion, the Secretary-General said that the Panel is called to help understand where the world is moving and what needs to be paid more attention to, taking into consideraion the existing challenges.

Former Secretary General of the International Organization of the Francophonie Michael Chan, who is also a member of the Group of Famous People, noted: “Seeing Armenia as part of a group is very important to me because I have wonderful memories of Armenia that will always be in my heart.”

“I think your country plays an important role in the IT field, for example, the TUMO Center, which exports its education system to various countries around the world. The special attention that Armenia places on education, supporting young people in applying new technologies, is a very innovative approach, which is a significant fact,” she added.